Fate of Essien to be learned Friday

Share All sharing options for: Fate of Essien to be learned Friday

Friday is D-day for Michael Essien.

The injured Essien remained in Angola on Wednesday to watch his home country, Ghana, book passage into the knockout phase of the Africa Cup of Nations with a 1-0 win over Burkina Faso. The midfield dynamo, who suffered medial ligament damage in training on Sunday, returns to London Thursday for further assessment. 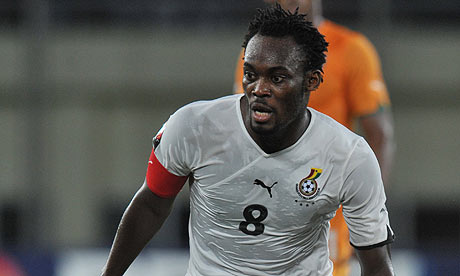 More than likely Essien will be out for at least a month, probably more. It's understood he suffered a partially torn medial collateral ligament in his left knee, and damage to his meniscus. Keep your fingers crossed.

Chelsea will not seek compensation

In related news, the club has decided not to seek compensation from the Ghanaian FA for the injury to Essien. The Times, with which this compensation story is being carried, believes he may be out for the season (s***).

According to the paper, Chelsea could have followed the path of Arsenal, who have begun legal proceedings against are the Dutch FA for the ankle injury suffered by Robin van Persie while on international duty in November. Citing the deal the English FA signed with all Premier League clubs to cover salaries of players injured on international duty with England, which Chelsea has used in the past (Lampard),  the Times reckons Chelsea may have been able to recoup the player’s £120,000-a-week wages for the duration of his layoff.

"The club recognise that demanding compensation that could reach £3 million if Essien is out for six months might have devastating consequences for Ghanaian football and that the future of the international game would be jeopardised if such actions became common practice. Chelsea will instead rely on their insurance policies to cover the costs of paying Essien during his absence."