Our much-needed winter break is finally over. Mostly healed, both mentally and physically, after a nearly two-week layoff -- thanks to the postponement of Chelsea's visit to Hull City -- things pick back up with a Premier League home date against Sunderland.

Confidence is high. Or it should be after that 5-0 dismantling of Watford in the FA Cup which somewhat served to eradicate that unimpressive run of results we compiled to close out the decade. Is Mourinho's vintage 4-3-3 the answer? Perhaps. 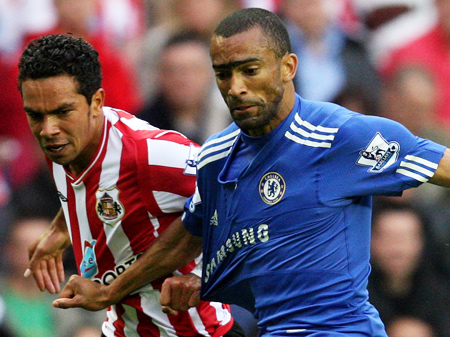 Whether Carlo Ancelotti will continue with a front three, or return to his precious diamond is unknown. Or is it?

Nico is going to be putting in a shift. Or Carlo is still undecided on that whole Ricky v. Alex thing. I'm voting for the later.

Statistics you need to know:

The statistics paint a pretty grim picture for Sunderland supporters. I'm not really buying it. Steve Bruce is a player's manager, and this side, despite underperforming in many eyes, is likely to challenge for, at the very least, and top-1o place. Disciplined, tough, that's how I view the Black Cats. Lee Cattermole is a gem, a rough one to be fair.

The scoreline earlier in the season, 3-1 at the Stadium of Light, was certainly deceiving. It took a breathtaking second-half display to erase what was a opening 40 minutes in which we were, for the most part, second best. The Bridge offers comfort, though, and with the club's recent lull seemingly in the rearview, I expect nothing less than three points.