Chelsea v Hull: What would have happened?

Share All sharing options for: Chelsea v Hull: What would have happened?

Only two Premier League matches survived this weekend's big chill in England. Chelsea's visit to Hull City was among seven league fixtures postponed, not because of potentially dangerous field conditions mind you but because of the potential treacherousness of the grounds travelling to and surrounding the stadium. Thank you for your concern Hull officials; I agree that many supporters would have had no idea how to handle themselves in the ice, or that many of those attending the match would be of the age of 5 or less.

Anyway. This postponement does not mean we can't have any fun! Me, personally, I plan on predicting just how this match would have played out. Want to join the party? 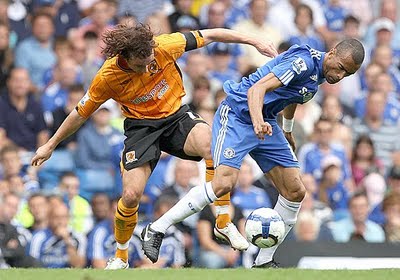 Chelsea XI
Ancelotti continues with the 4-3-3 formation that was recently debuted -- and displayed promise -- against Watford in the FA Cup. Nicolas Anelka returns following recovery from a hamstring tear.

First Half
Anxious to erase the memory of December -- and month in which Chelsea won just twice in six league matches -- the Blues open the match on what could only be described as a tear,  think American Werewolf in London. Plenty of possession. Plenty of fluid movement. Plenty of scoring opportunities. No goals.

Unlike this season's previous meeting at Stamford Bridge, Hull failed to stake a shock early lead yet remained in contention throughout the opening 40 minutes even if it wasn't at all pretty. Chelsea's best chance(s) of the half fell to first Florent Malouda and then the recalled Nicolas Anelka. Both unearthed fine saves from Hull keeper Myhill.

Second Half
The Chelsea support weary of another opportunity lost quickly saw such worry eased with an attacking flurry that produced the match's opening goal just five minutes into the second half. Incisive play from both Zhirkov and Malouda on the left set up Anelka, who's shot from the right edge of the six could only parried back into play. You know what that means: a late-arriving Lampard cleaning up from close range.

Chelsea continued to pressure an ever-retreating Hull side, eventually adding a second tally after 65 minutes. This time Anelka made no mistake, receiving the ball near midfield and ghosting past a pair of would-be tacklers before lashing a low, 20-yard strike past Myhill at his far post. Hull momentarily provided a subtle threat with 20 minutes to play, but never really managed to test a surprisingly proactive, aggressive Cech in the Chelsea goal.

The Blues capped a resurgent league performance with eight minutes remaining through the substitute Daniel Sturridge, who now has three goals in two matches.  The win vaults Chelsea four points clear of Manchester United and six ahead of Arsenal.

Conclusion
A fairly comfortable 3-0 win. That's how I saw it at least. How did you envision it playing out?