Poll: Should Chelsea attempt to recall its African players?

Share All sharing options for: Poll: Should Chelsea attempt to recall its African players?

By now, we have all heard the unfortunate news revolving around the Togo national team. Their team bus was attacked in Cabinda, killing three and injuring several more including goalkeeper Dodji Obilale, who remains in intensive care. Simply horrible news. 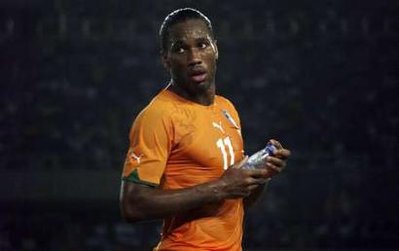 Chelsea forward Didier Drogba during a friendly on Jan. 4

The team has since left the tournament, though they are open to a return. Several Premier League clubs, including Portsmouth and Hull City, have expressed a desire to recall their players citing safety issues. Arsene Wenger, for one, is not of that view. The Arsenal manager said today: "It wouldn't be fair, let's say that. What is behind things like that? Is it a selfish motivation or is it a real issue over security? We, here, are not in the best position to judge the security of this competition.

Chelsea have yet to issue a statement, so I'm asking you what your thoughts are on the situation. Should CFC attempt to recall its African players because of the security issues surrounding the African Cup of Nations? Let me know.