What did we learn from the Community Shield?

Share All sharing options for: What did we learn from the Community Shield?

Sure, it's not really supposed to be a competitive match. So, you ask how can you really learn anything from it?

Well, if you watched today's CA you know it was actually far from a friendly encounter. There were body checks -- word to Michael Ballack -- and a fair share of jawings from both sides. However, it also was quite an engaging, at times fiercy played, contest between two of the best clubs in the world. 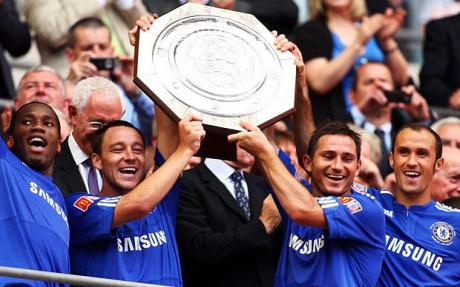 More impressively, at least from a Blues supporter's perspective, Chelsea rebounded from a uninspiring first half to claim their first hardware under CA -- the first trophy of the new season. On penalties no less.

Carvalho is back. And should start.
The skillful Portugese endured a torrid 2008-09 season. His first competitive look of the new campaign was a flashback to better times. Actually, it was a look at one of the best defenders in the world. His maurading runs forward were a sight long forgotten to Chelsea supporters. It was sorely missed. His sleek, intelligent play at the back alongside EBJT was effective as ever.

Now I've always been a strong advocate for Alex, despite the growing sector of supporters whom aren't fans of the lumbering Brazilian. But, while Alex has shown a great capacity to excel in tandem with JT, it's clear Ricky provides much more to the partnership. CA should know this, too.

The diamond is rough, but has promise
CA's much-discussed, diamond 4-4-2 took its share of hits during a sluggish -- no, really, a poor -- opening half saw Chelsea look disjointed and sloppy. You, like me, were probably thinking: 4-3-3, please.

Then, the second half displayed the promise we witnessed during the preseason trip to North America. Of course, there were adjustments -- Lampard dropping deeper and Anelka drifting into a wider position -- but the signs were there.

Hang in there, people.

Ballack still has a key role to play
Dirty Ballack. Are you as sick of hearing this as I? Even my friends are bombarding me with detestful messages dismissing the German captain as nothing more than muscle.

Here's an example of the dross I've received this week: "Has there ever been a superstar who turned into a hardman when he couldn't cut it as a superstar anymore?"

Really? I don't recall people referring to Viera and Keane in this light. Or maybe these people simply didn't see match. If they had, they might have saw this...

A body check on Evra by Ballack -- a clear foul but nothing more -- followed by 30-plus minutes of pristine distribution and work from box to box. One of our better performers on the day, I'd say.

Bosingwa > Ivanovic
As long as CA unearths a diamond -- and Joey Cole is not among the starting XI -- Bos must be the choice at right back. Ivanovic, while solid, does not provide either the width required nor the creative push that Bosingwa can at the position. Ivan was involved in his own 15-minute horror short at the opening of the Shield, skinned by both Evra and Nani on multiple ocassions. His service in the final third was subpar as well.

Simply put, Bos is the boss (no Bruce Springsteen) at right back.

A Premiership title is within grasp
On the basis of Sunday, a fair but hardly inspiring performance, Chelsea appears well placed to recapture the Premiership title. Our rivals have weakened, we have strengthened. Continuity on the field, with a proven winner -- a club winner, by the way -- behind the wheel, may well equal something special in 2009-10.