Share All sharing options for: The sound of silence: England's Brave John Terry

John Terry will take part in his first training session of the preseason today. This with his future at the club still largely uncertain.

The Chelsea captain has been the subject of persistent interest from Manchester City this offseason, with at least one bid already being rejected. These approaches follow a similar pursuit of Terry from City during last season's January transfew window. 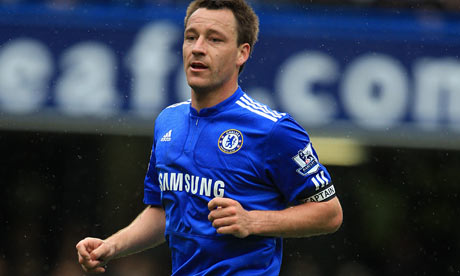 Club officials, including new manager Carlo Ancelotti, chief executive Peter Kenyon and chairman Bruce Buck, have sternly stated that England's Brave John Terry is NOT FOR SALE. Romes is said to be adamant about retaining Terry.

Who we haven't heard from, though -- the most critical piece in this puzzle -- is Mr. Chelsea himself. The man has been MIA since news of City's bid first surfaced. It's puzzling, and unassuring, to be sure.

Why hasn't he publicly stated his desire to stay at his boyhood club? What has prompted his silence?

Is he actually considering leaving Chelsea? We don't know, and that may be the biggest indication yet that there is a little more to this than perhaps we thought.

Tomorrow not only marks Terry's return to training; he's also scheduled for so-called "showdown" talks with members of the club hierarchy including Ancelotti. It's not known if Romes will be in attendance, but you'd think he would be considering the significance.

Does this meeting point to even more fracture between Terry and the club? Or is simply a standard sit down? It's hard to tell, really.

A report in the Sun -- yes, the Sun, so take it with a grain of salt -- suggests Terry may feel underappreciated at Chelsea. The author, Ian McGarry, introduces some pretty baseless points but does mention the length in which it took JT to get a new deal in 2007, a process which apparently included an insulting offer of 95K per week. The story goes on to suggest, via a "club source" that "Terry is seen as a declining asset rather than a valuable commodity."

There's also this idea that Terry is upset with the apparent lack of communication between he and the club regarding the City dealings. This report that has been rubbished by the club and sounds bogus to me -- but you never know.

All this, however unsubstantiated it is, gives us a possible reason for Terry's silence thus far. We can only hope this man, Mr. Chelsea, speaks publicly tomorrow and lets us know what's actually on his mind.

For better or worse.