Star of 'Curb Your Enthusiasm' speaks to Chelsea TV

Share All sharing options for: Star of 'Curb Your Enthusiasm' speaks to Chelsea TV

Blues television sat down with Larry David on Tuesday. Not really. But seriously, isn't Chelsea chairman Bruce Buck a dead ringer for David? Whatever. 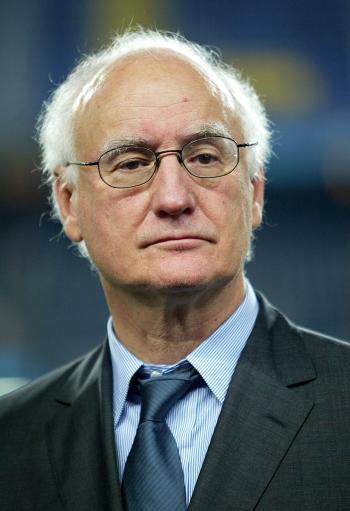 What brought you to the decision of appointing Carlo Ancelotti?

We were looking for a manager who would build for the future and bring us many trophies for many years to come. Carlo has been successful as a manager, winning the coveted Champions League. He has also been a very successful footballer himself, so we think he has all the characteristics to come to Stamford Bridge and bring us success for the long term.

You mention that impressive CV there. What goals, what targets have you set him?

The goals are pretty much the same goals that we have every year, come 15 April we would like to be in contention for two or three cups. If he gets us there then we will be satisfied, if he gets us a little bit further and wins us a big cup or two, then we will be very satisfied.

We have already seen the arrival of a couple of new faces this summer, how many can we expect to see before the season kicks off?

Well, it is hard to say. Candidly, maybe it is none, but we said before the start of the transfer season that we expected four or five players in and a couple out, and that is still our expectation.

We announced [Yuri] Zhirkov, and you know about [Ross] Turnbull and Daniel Sturridge. We are looking for a marquee name but as you know, as you read about it in the papers, most of the big clubs are chasing the same players. We are only going to get one of those top-notch players and there aren't very many of them.

And we are only going to get one of those top-notch players if the price is right and he fits into our team appropriately. But we are looking and we are optimistic.

You mention Yuri Zhirkov there, how did that deal come about and was Carlo Ancelotti aware of it?

Oh yes, Carlo Ancelotti has been aware of everything we have been doing in the transfer market. We announced that he was manager on 1 June and since then he has been very much involved in the transfer process.

You also referred to some of those marquee names there, how close has Chelsea come to signing a Kaka, a Franck Ribery or a David Villa?

Well obviously not close enough, because we haven't signed them. But I don't think you can really say about how close we have come. We are chasing a few and we think they fit in very well with our team, we think we know the right price for these players and there is still a lot of time left in the transfer window, so let's see how it sorts out.

One other marquee name of our own, John Terry, has been dominating some column inches over the last few days, what's the official club line on that?

You mentioned also some of the younger faces such as Daniel Sturridge that we have seen come through our doors. Does that represent a different outlook, a different transfer policy from Chelsea's perspective?

Well maybe from the outside it may look a little different but really it isn't. From day one we have said that we want an English spine to the team and we have also said that we wanted to build some young players.