Share All sharing options for: Official: Time to Zhirkov

Anyway, the man with one brilliant last name has finally, officially, joined Chelsea. Yuri Zhirkov, aka the Russian Ronaldinho, comes to Stamford Bridge from CSKA Moscow for a fairly hefty £18 million. Zhirkov inked a three-year contract, supposedly with an option for two more years. 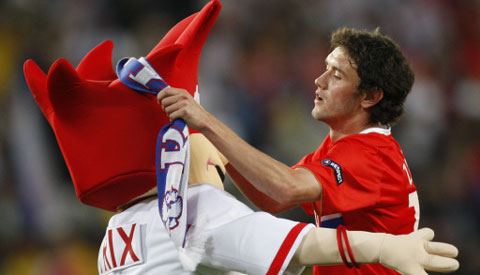 "Any footballer would be happy to sign a contract with Chelsea, and at any time," Zhirkov told Chelseafc.com. "I have been received very well here, and have been shown the base at the Cobham training ground, everything is super."

So, we can finally put one of those ageless rumors to bed. Funnier still is this little nugget from Zhirkov, as reported by the Guardian.

"Abramovich came to our [CSKA] dressing room to congratulate the team on winning the Russian Cup final in May 2006," Zhirkov is quoted as saying. "Then, he suddenly turned to me and said, 'Yuri, start learning English'.

"I didn't say anything, just smiled. Unfortunately, I still have not learned the language. Now I know I should have taken his advice more seriously, but back then I didn't think I would ever need it for my football career."

I'm sure the apparent Blackburn Rovers supporter -- really? -- won't have a problem with the language considering his workrate on and off the pitch.

So. With Zhirkov added to the mix, Chelsea now appear to have perhaps the strongest left side in England, if not the world. Take a look at this for kicks: Florent Malouda, Ashley Cole, Joe Cole and Yuri Zhirkov. That's peerless, especially if Joey Boy returns to form. Then we can move him to the right; niiiice.

Of course, Zhirkov does not fill a priority -- the right side is still lacking in quality and depth. However, squad depth has been a major problem over the past two seasons and our recent signings certainly go a way in solving that riddle.

The addition of a right-sided player and perhaps another forward -- both seem likely at this point -- and Chelsea will be much stronger than last season. A scary thought to be sure.

Anyway. Let's welcome Yuri to the club. Sure to be a Chelsea legend in the seasons to come, on the back of kits at the very least.