Those baby blue boys on the other side of Manchester have come knocking again. And, again, they're bringing the chocolate and flowers to the door of England's Brave John Terry. 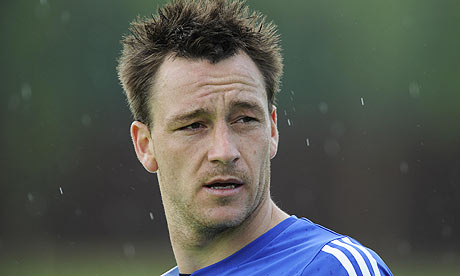 As expected -- like City's initial inquiry in January -- they were quickly told to beat it. This time, however, there was an official statement, a rather snarky one at that. I likes.

Via the official Web Site ...

"Chelsea Football Club can confirm it has completely rejected an offer from Manchester City for John Terry.

"It was made clear to City, for the second time following an approach last season, that we would not entertain any conversation on the subject. At that time John also reiterated his total commitment to Chelsea.

"We would like to make clear, and will not do so again, that John is not for sale."

Gotta love that last sentence. Romes is throwing it down, mob style.

The Guardian's take on these events is a tad different, suggesting EBJT may well be intrigued by a move to Midlands. Nonsense.

All I'm going to take from that article is the figure being quoted for the transfer, between £25-30 million. Really, City? You're going to insult us with that kind of garbage? At least present a credible £40-plus million offer.