Quick Recap: How impressive was that?

Share All sharing options for: Quick Recap: How impressive was that?

The Special One's Inter Milan was dire, no question.

But Carlo Ancelotti's Chelsea? They were quite impressive during Tuesday's decisive 2-0 win in Pasadena. 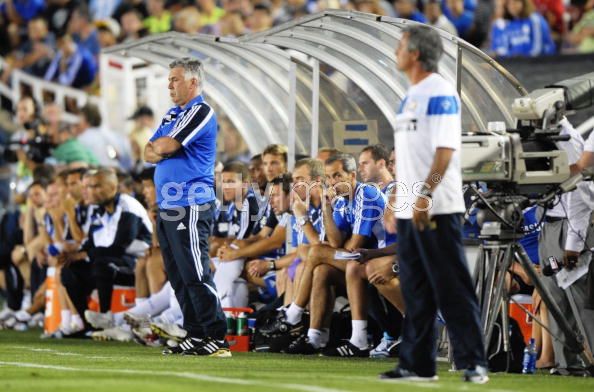 Again, Carlo broke out the 4-1-2-1-2 formation and, again, the result was a tidy attacking performance. The movement, the passing, the control, the speed of play ... it was all just so fluid. In fact, it was more silky than Chelsea fan Will Ferrell's mustache in Anchorman.

Mourinho probaly needed a whole heck of a lot of scotchy, scotch, scotch after what really was a miserable outing from Inter. Balotelli, in particular, looks appalling. The so-called next thang thang, huh? I guess the next thing is gar-bage.

Deco. Again the old man proved he's not entirely useless. I'd gauge he's got a future at Stamford Bridge following two quality displays. His passing and workrate have certainly risen to another level since last season's close.

Di Santo. Again, the kid shows up -- and doesn't score despite looking the part. Santo exudes this calm that I just love; he looks so comfortable out there.

Drogba. Looks fitter than he did at anytime last season. About to ink a new deal. All-around good news there.

Anelka/Sturridge. Appear a lethal pairing. Anelka may have gained a step in pace -- nuts at his age. Sturridge looks an amazing fit.

Kalou. New position, same old Kalou. Will this guy's touch ever get better?

Narrowness. A minor issue, due to the diamond. Malouda found himself in a central position, or entering a central position looking for the ball, a number of times. Again, this is a slight worry, one I think we may well not need to address. After all, Carlo won the CL with this formation.