Share All sharing options for: Finally someone to blame: Arnesen becomes SD

As had been somewhat expected -- yet kind of shocking, really -- Frank Arnesen, chief scout and director of youth development at Chelsea, has now added sporting director to his list of responsibilities at Stamford Bridge. 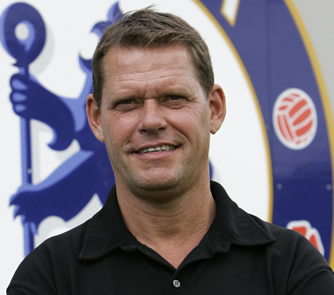 What the hell is a sporting director, you ask? The hell if I know.

But, really, supposedly Arnesen will act as a sort of liason between Ancelotti and the board, specifically Peter Kenyon, with regard to transfer targets. There's also a lot of vague jargon mashed into this title that we really have no idea what exactly he'll be doing -- or, more importantly, whether or not Carlo really wanted him in this position.

Furthermore, if this is a position primarily based on targeting transfers, hasn't Frank somewhat already being doing this for years, though (i.e. Mikel, Kalou)? Then there's the whole youth development debacle to address. Has FA really done enough there to warrant this kind of role? I think not.

If you're like me, you're wondering if there is anything positive about this appointment. Perhaps. At least now the blame game can focus on someone other than the manager. If new arrivals don't perform, and the club suffers as a result, maybe we'll see Frankie shipped out rather than another manager.

Don't get me wrong, I know Arnesen has had some success in identifying talent (not really at Chelsea, mind you) so I'm not entirely opposed to the move. However, I'm not holding my breath, either.