No snitching?: Abidal rats himself out

Share All sharing options for: No snitching?: Abidal rats himself out

Now, this one? This one I didn't see coming. 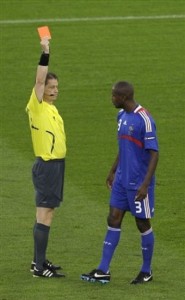 French and Barcelona defender Eric Abidal was given a straight red card for apparently tripping Chelsea forward Nicolas Anelka, who was through on goal, midway through the second half of Wednesday's Champions League second leg at Stamford Bridge. Abidal was asked by Setanta reporters after the match about the call. Here's what he had to say:

I was defending against Nico [Anelka], but as I was the last defender and the referee thought I fouled him, dismissing me is normal.

If I let Nico run towards goal then he scores the second one and it is over, so we can say it is a good foul. I sacrificed myself. It is always disappointing to reach the final without being able to feature.

Wow. I didn't even think he caught him. However, if the man himself fesses up to the crime, it must have been committed.

This makes the case against Ovebro all the more interesting. Wonder what the Barca fanboys have to say about this now that they're main case against the penalties is out the door?