Let's wrap this one up: Bravo, boys

Share All sharing options for: Let's wrap this one up: Bravo, boys

Chelsea left it all on the pitch Wednesday, coming within seconds of a second consecutive appearance in the Champions League final. Those who wanted football got it; the Blue, for large portions of the match, toyed with the Barcelona defense. Well, let's be honest here, the Blues dominated this match save for a minute of extra time.

Of course, Barca dominated possession as has become standard for a match featuring the likes of Messi, Eto'o, Iniesta and Xavi. However, those transcendent attackers fell victim to the relentless, unwavering power of the Chelsea defense. Barcelona produced only one shot on goal, an Iniesta dagger in the 94th minute that earned the Catalans a date with Manchester United in Rome. And even that was a fluke, Essien somehow losing his footing when a simple clearance looked all too simple.

It was harsh on the Ghanaian who solidified himself as one of the five best players in the world -- yeah, I said it -- with his box-to-box melee on Barca heads. His goal, a miraculous volley from just outside the penalty area, is the stuff of myths. 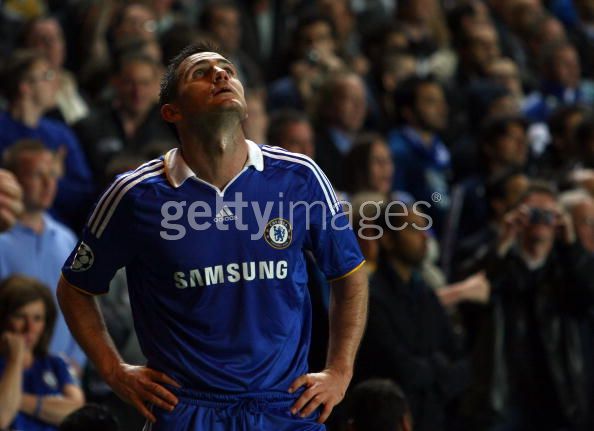 Chelsea, however, as Frank Lampard remarked before this second leg, probably feel cursed. It was footing that cost the Blues a first CL title a year ago. This season, disappointment came in the form of a sparkling strike from the man with the biggest head on earth.

The blue half of London has to be proud, though. This was a performance worthy of praise. If not for some wasted opportunities, particularly from Didier Drogba, this one would have been over well before the final minutes. Yes, dubious officiating played a role , but now that I've calmed down a bit I'm not going to complain. We had our chances; we should've buried them.

John Terry was masterful. So, too, was the entire team for that matter. Cech had little to do and Anelka may well have failed to match his form from the weekend, but this team truly showed why it's become one of the world's elite. Hiddink as well, over his few months in charge, has display the kind of steel and tactical nous needed for this position. If only we could persuade him to stay on permanently.

Regarding the Drogba substitution: Is it me or was he injured prior to being subbed. I know people are giving Hiddink slack for removing him but, at least to me, he appeared to be struggling with a knee knock just before. I can't imagine Guus wouldn't have wanted him on the pitch at that point.

As for this Chelsea's classlessness, I can't defend the actions of Drogbs & Co. after the final whistle. What I can do is let Pep Guardiola tell it...

"I want to thank John Terry for coming into the dressing-room and congratulating us. He’s a true gentleman," Guardiola said after the match.

We've stil got one piece of hardware to collect this year, boys. Let's go get it at Wembley.