Share All sharing options for: CL Prev: Enjoy the silence

You know, the one that confirms our second consecutive appearance in the Champions League final.

No more "Good vs. Evil" or "Right vs. Wrong." None of that "this is such an injustice" garbage. Just this: Chelsea wins, Barcelona loses -- and all is right in the world. 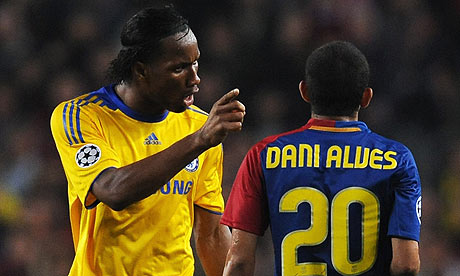 "One team wanted to play and the other one didn't, it's a shame..."
-Barcelona midfielder Xavi following last week's 0-0 with Chelsea at the Nou Camp

Remember this one? I'm sure you do; we've heard it, in not so similar words, for a week now. It's getting to be absurd.

However, you think Hiddink doesn't have that plastered on his tactical board? Get real.

Everything thinks Barcelona is motivated to overturn the wrong that was done a week before. No. Chelsea, my friends, is the motivated side.

Lampard has seen the papers. So, too, has England's Brave John Terry and the Drogba. They've all seen them -- and they're pissed.

So everyone thinks we're going to open it up at Stamford Bridge, eh? Are you kidding me?

I expect more of the same from Hiddink, with the Blues setting back for -- I don't know -- 60 minutes or more. Why would you rework something that worked so well the first time around? Of course we need to score, but we had a pair of fine chances at the Camp (c. Drogba and Ballack).

I expect those to be buried this time around. So should you.

No Puyol + no Marquez = Drogba buffet.

Barcelona will be at a severe disadvantage without this pair of steadfast defenders. Of those left, Gerard Pique will remain and provides a modest threat to Drogba in the air. Not really, though.

However, of the possible replacements for Marquez or Puyol, neither really scares me. In fact, I'd be licking my lips if I was playing against them -- and I'm 5'10". Martin Caceres, the 21-year-old who has seen little action, would be a long shot if you ask me. Instead, I expect Pep will ride with Eric Abidal in the middle allowing old man river (Sylvinho) to play out on the left.

If the video below is any indication of what we can expect from the Frenchman (check out 0.55), then I must say: Thanks Pep, I appreciate the generosity.

You already know. If not, see my preview of the first leg.

Xavi. This should be called cutting off the supply. Stay tight on him and we'll no doubt be in contention.

Iniesta. Keep him quiet and we're in business.

Barcelona is an unbelievable side. There I said it. FCB could easily thrash five past us tomorrow and I wouldn't be surprised. -- they are that good.

But this is Chelsea we're talking about.

2-1 to the Blues. Goals by Drogba and Lampard.

See you in Rome.