CL Buildup: Too good to be true

Share All sharing options for: CL Buildup: Too good to be true

This, my friends, was too hilarious to pass up. By one of the greats (HA), Andrew Sartori. 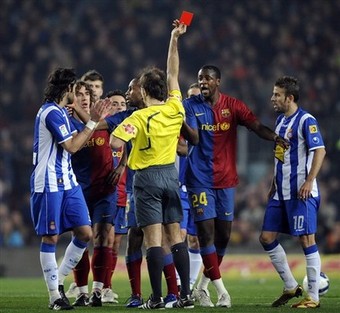 "If Barcelona lose to Chelsea on Wednesday, it will be a monumental injustice. This game, for once, is as important as the pundits make it out to be: it is the battle between everything that is wrong with football (Chelsea) and the few remaining glimmers of hope for the sport (Barcelona).

Chelsea, as we all know, are the archetypical villains of the modern football world. They are ruled by an oligarch and fueled by the petrodollar. In this season’s Champions League competition, they, along with the other English teams, have played well enough, running riot over lesser teams and playing anti-football when they come up against teams that match their might (there are, of course, notable exceptions, such as the Blue’s thrilling 4-4 draw with Liverpool). In this manner, they have backed their way into the semi-finals without breaking much of a sweat.

On the other side of the equation we have Barcelona. I’ll be honest: for many years, I wasn’t a Barca fan. I stayed on the sideline as everyone jumped on the Ronaldinho bandwagon from two years ago and rooted for Arsenal in the 2006 Champions League final. Recently, though, I’ve been practically mesmerized watching them play. I’ve started watching them whenever they’re on GolTV. Their football is a sheer joy to behold. My first exposure to this football revolution was watching them systematically dismantl and embarrass Bayern Munich, a perennial European powerhouse, in the Champions League knockout, going 4-0 up in 45 minutes.

And what about this past weekend! Real Madrid made a feeble attempt at stealing the show in the first fifteen minutes, but I always knew Barca would storm to victory. And storm they did. The goal that epitomized the team’s beautiful attacking play was the fifth goal: Eto’s cool one-two with Messi, who, clean through on goal, had the poise to dummy Casillas before calmly slotting the ball in the corner.

Barcelona deserves to win on Wednesday because of their sheer exuberance for the game. Obviously, the players on both teams are lavishly paid, but Pep Guardiola has succeeded in instilling a simple love of the game that is so rare among professionals these days. For Gus and Co., every game is a job. For Barcelona, every game is a game.
Every time Barca attacks, the viewer sits up in his chair, holding his breath in anticipation, not sure whether to sigh in disappointment as a defender happens to break up a masterful move or laugh in glee as Messi or Eto or Henry skips around defender after defender before calmly leaving the goalkeeper for dead and slipping the ball into the net.

These movements appear so simple and that is the joy of watching it: the crisp passes, the prescient knowledge of where every other teammate on the pitch is going to be, the cool-headed finishing. This is how football should be played (and once was played, or so I’ve been told).

So Wednesday is an important day: it can perpetuate the money-grubbing, business-like side of the game or it can champion the poetry-in-motion, play-for-the-sake-of-playing style of play.

No offence Chelsea, but you deserve to lose: you deserve to roll over and let Barca hit 5 past you. Anything else would be an indication of just how low our modern game has sunk. For once, the Utterly Important need to swallow their pride and know when they’ve been defeated."