This is the big one, my friends. 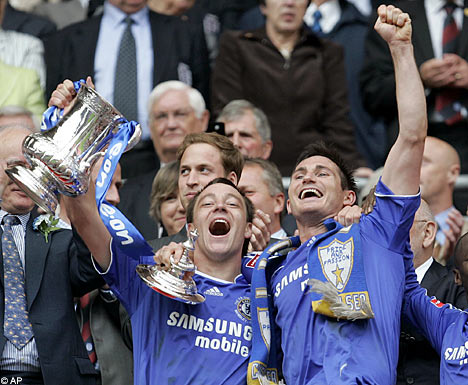 What else do you need? How about a trophy presentation following the final whistle? Me likes.

Don't engrave Chelsea's name on that piece of hardware just yet, however.

Everton is a great side. No, a fantastic side. David Moyes' has worked small miracles on Merceyside. This season alone he's fought off a shrinking budget and numerous injuries, even pushing the Toffees into fifth place in the Premier League. Oh, and reaching a cup final, too. That's no big deal. Really, if we weren't playing for the cup, I'd be rooting for Everton.

Chelsea will have to be focused and in form to emerge victorious in a match that will no doubt be very tight. Expect, as always, for Frank Lampard to be at the center of what's good for the Blues. However, Florent Malouda -- who, by the way, is probably pissed about this Zhirkov business -- to continue his sterling run of late with a goal.

Prediction
Like I said, this will be extremely tight. 2-1 to our Blues.

Alright, people. Let's get up, get out and get something -- a second title in three seasons.