Ancelotti "would love to coach Chelsea"

Share All sharing options for: Ancelotti "would love to coach Chelsea" 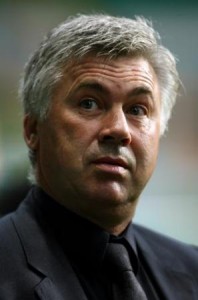 Yes, the AC Milan boss said he would love to be a part of Roman's army at a news conference today in Italy. But only after stating he was "100% certain that I will still be at Milan next year."

Here's the transcript: "I am a little tired talking about these things. I am Milan coach until 30 June 2010. I know how things are, I don't see things cloudy, I see everything very clearly. If you had to ask me to express in a percentage I would say that it's 100% certain that I will still be at Milan next year.

"A proper response on my future could be postponed by a matter of days or several years. At the moment I don't have anything open with Chelsea. I have not talked to them. I did last year, but not this year. [But] we still have the end of the season, and if we have to find a solution we will. I am open to anything. It's obvious that I would say yes if you ask me if I would love to coach Chelsea."

The most revealing part, at least to me, is this little fragment: "I did last year, but not this year." So, Chelsea has made no contact we Ancelotti this year, if the man is in fact telling the truth. Interesting seeing as the English media has ran with this potential move for weeks now.

Also, what if all this is just a smokescreen to keep the media off the trail of the club's real targets. Who knows?

The Rossoneri is supposedly going to make an announcement regarding the future of the club on Monday. Will this have anything to do with Ancelotti. Stay tuned to find out.