So Manchester United are champions again. Congratulations to Fergie & Co. They did the minimum, and still retained the title for the third consecutive year. Better that than a Liverpool commencement. I assume you'd agree.

On to the week's main event, a home date with Blackburn Rovers. On the surface, it appears a pushover. 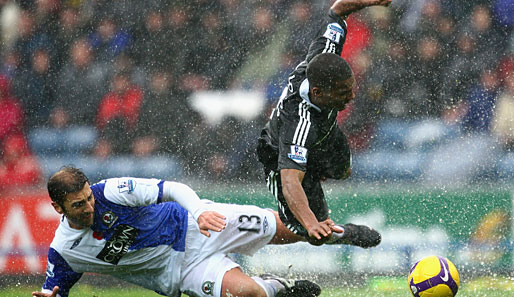 Thanks to results Saturday, Blackburn cemented its place in the Premier League for another season. Nothing to play for except their jobs, eh?

Chelsea, meanwhile, wrapped up third place last week but clearly are still smarting from the Champions League exit -- now forever to be referred to as the injustice. Credit Hiddink for that one. Finishing second is still a possibility, too, though it appears to be highly unlikely.

The most glaring reasoning for this to be a comfortable outing for the Blues is the fact that it will be Hiddink's final home game in charge of the club. And while he's hinted at times that he has in fact thought about staying on as manager, it's simply not going to happen.

He'll be keen to go out in style in front of the Stamford Bridge faithful.

How Hiddink will go about making sure that happens is another story. Will he opt for youth now that the season is wrapped and a cup final on the horizon? Or will he remain faithful to his best XI, opting rather to keep them match fit ahead of the FA Cup final on May 30?

It's a tough call. From my perspective, I'd love to see some of our youngsters finally get a full 90 minutes. Players like Mancienne, Di Santo and Stoch have displayed glimpses of promise while never really getting consistent minutes. With two matches left this season, why not get these guys on the field and see what they're truly made of?

If I'm being realistic, though, I expect a full strength side. And, really, why not? This club is arguably the best in the world right now on form. Ballack, Belletti and Kalou -- who picked up a knock in a reserve match -- are all doubtful.

Prediction
Like I said, I see us taking this one quite comfortably. Then again, we're debuting the new kit today and we all remember how that went a year ago. Whatever, 3-0 to the Blues.