Isn't it obvious? The case for Frank Lampard

Share All sharing options for: Isn't it obvious? The case for Frank Lampard

I never got around to discussing Frank Lampard's omission from the list of nominees for the PFA Player of the Year -- an award Ryan Giggs oddly won. This week we learned that Stevie Gerrard had been named the FWA Footballer of the Year. ... Rubbish.

Our boys over at the EPL Offside -- Rob and Wayne -- have asked who we (the royal we) think is the best player in the Premier League. Now seems as good a time as any to make the obvious case, the case for Super Frank.

Gerrard beat out United boys Giggs and Rooney for his hardware. The PFA list was even more hilarious. It featured six players, five of which resided in the red half of Manchester. Ludicrous? Of course. But that's not the point.

The most baffling aspect of it all was Lampard's name not even being among the six nominated. You know, now is the perfect time to discuss this travesty. As Didier Drogba would say: "It's a f****** disgrace." 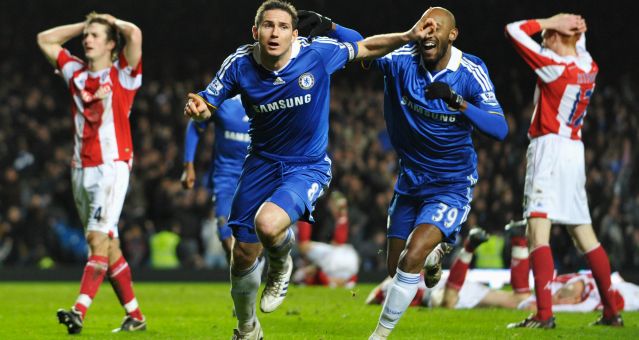 Why Lampard has yet to win a PFA award is just as bemusing as his omission this time around. This year's honor, which covers part of 2007-08 as well, should have been all Frank. It's quite an easy argument, really.

This season, at the time of the announcement of nominations (mid-April), Super Frank had already punched home 19 goals from 46 appearances while adding 17 assists. That's more than a goal every three matches, an astonishing tally for a midfielder. I have also read that Lampard, as of late April, had created 131 scoring chances for teammates -- a number more than double that of Gerrard, who sat at 70. This was said to be a new Premier League record.

As of right now, Lampard has 20 goals and 20 assists in 67 starts in all competitions. Those are phenomenal numbers, my friends.

And remember, much of this was done with Chelsea imploding from nearly every angle. At one point, Scolari was sinking the ship; Drogba was nowhere to be found. And we were on the verge of plummeting down the Premier League standings. Maybe those drab performances through the middle of the season -- seeing as votes have to be submitted by the end of February -- skewed the eyes of voters. It should have been the opposite; this man continued to flourish while so many around him were floundering.

His performance in Chelsea's 4-4 draw with Liverpool in the second leg of the Champions League quarterfinal was exquisite. Netting twice, the last of which capped the night, Lampard was superlative. He was, simply put, the star of the game of the season. If that's not worth a nomination, I don't know what is.

There it is. I rest my case. When it comes to Premier League performers, there are few -- if any -- better than one Frank Lampard.