Alan Shearer came. But he couldn't conquer the Blues.

It remains to be seen if The Messiah will, in fact, be Newcastle's savior this season. On Saturday's evidence, a 2-0 loss to Chelsea, he'll need to do more than just turn water into wine. 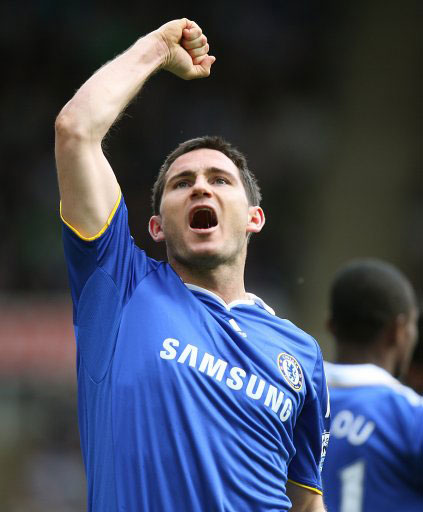 The Blues overturned a drab first-half performance over the final 40 minutes to see off the Magpies in Shearer's first game in charge. Goals from the ever-present Frank Lampard and the fantastically effective Florent Malouda -- yes, really -- kept Chelsea within striking distance of a Premier League title. Of course it's a long shot, but two points behind Liverpool is better than five right?

Potato went with an interesting 4-2-3-1 formation. Serbian lion tamer Branislav Inanovic got the call-up instead of Belletti for the injured Bosingwa, and was solid if not spectacular. He does not offer the same attacking verve as Bos, or even Mancienne, but is much more reliable at the back. I expect to see him in the XI for Liverpool midweek. Mikel returned to the lineup alongside Essien, with Lampard, Kalou and Malouda supporting Anelka. Both Mikel, sickness, and Essien, fitness, were off the pace somewhat; it's understandable, though. Kalou was his usually self, except this time there was zero brilliance -- just shockingly bad play. Anelka could have had a hat trick; he didn't.

Malouda, however, was borderline superb, as was his flank mate Ashley Cole. Coincidence? Not really. These two always seem to link up well down the left channel. Both worked tirelessly, and each was seemingly always available. It remains to be seen if Guus will continue with Flo, but I don't see how he cannot.

I also need to give a shout to Di Santo. The young striker made the most of his 25-minute cameo -- the longest he's played continuously for the Chelsea first team, I think -- by looking dangerous and getting himself in quality positions throughout the second half. He even has a bit more pace than you'd think. Needs more minutes, me thinks.

So I've already said the first half was drab. In actuality, it was much worse. Chelsea hardly resembled a side challenging on three fronts, while Newcastle -- well, we got what was expected there. But not really. Shearer's appointment did not seem to have the galvanizing effect, at least not yet, that I and most others had expected. Not even the crowd looked that jovial. I dozed off at one point and, to think, there was no Geordie rowdiness to wake me up. Kinda sad, really.

The second half was much more to our liking. It took a Newcastle mistake to separate the sides early in the frame, and Lampard -- as usual -- was on hand to benefit. Fabricio Coloccini, who to be fair was absolutely dire on the day, first failed to clear the ball past Anelka. He then failed to beat Anelka to the punch. A shot from Anelka followed, one that curled over Steve Harper and bounced up onto the crossbar. Lampard, taking advantage of Coloccini's lax reaction, easily nestled a point-blank header into an empty net. 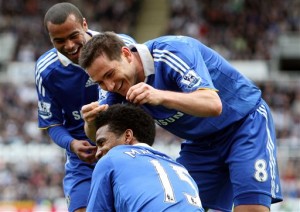 Chelsea quickly added a second, this one coming straight down the pipe. A Cech punt was knocked on by Anelka into the path of Malouda, who easily wrong-footed Ryan Taylor before lashing one past an exposed Harper. The Blues needed it, too -- or so they thought.

Wee man Michael Owen pseudo-scored later in the half, having his goal-bound effort cleared off the line by the excellent Ashley Cole. Replays confirmed the ball was over the line, but there was nothing doing for Newcastle at this point. The refs had already moved on, no goal.

It was that kind of day for Shearer, whose eight-match tenure looks more daunting of a task by the hour. If he keeps Coloccini in the mix, it's likely to be nightmarish by the end.

Attention turns to Wednesday for Chelsea. Anfield nights in the Champions League -- the stuff of legend scum. Let the games begin, my friends.