Could we be playing Newcastle at a worse time?. The Messiah (Alan Shearer for those of you who have been living under a rock -- or the United States) will work the sidelines for the first time as a manager when the Magpies host Chelsea on Saturday. 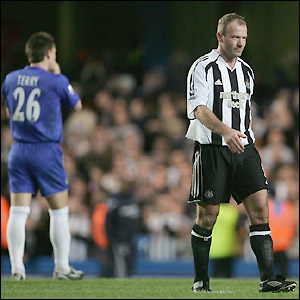 It was a sensational move for Newcastle, a team seemingly destined for relegation until Shearer was appointed this week. Now, of course, we can expect everybody in the entire Toon Army to close the season on some sort of absurd tear. Oh, and of course, this thing is at St. James Park. Can't wait to see 52,000 obnoxious Geordies off their respective rockers. Yay.

So, can Chelsea weather the initial storm? If the Blues want to hang around in the title race, they better. Chelsea, playing before both Liverpool and Manchester United this week, can pull within one point of league-leading United if it can grab all three points here.

With that being said, things aren't looking up at the moment at Stamford Bridge. An ankle injury picked up in training has ruled Didier Drogba out of Saturday's match. To make matters worse, Jose Bosingwa is out for the foreseeable future with the dreaded hamstring strain. Fortunately, Nico is back from his toe problem to assume the role vacated by Drogba.

Shearer is dealing with injury problems of his own. Participation for Steven Taylor, Sebastien Bassong and Damien Duff is up in the air. Michael Owen, however, looks fresh, as is Joey Barton, Danny Guthrie, Xisco and Mark Viduka -- really?

How will this thing turn out? Well, it's up in the air. I'd like to say anything but three points for the Blues is just crazy talk. Now, I'm not so sure. I do expect some kind of goal fest, though.

And, who knows, Shearer might lace 'em up at halftime. I hope not.