"I have played this Barcelona game twice in my head. In my head I have never lost a game in the preparation."
-Guus Hiddink, Chelsea manager

Nothing more need be said.

But, to satisfy your appetite for more on the epicness that will be Barcelona-Chelsea, I'll do my best.

Middle ground
First things first, take a look at these two fruity bastards below. Soak it in. Remember them, because you're going to see a whole heck of a lot of them today.

Forget Messi. The game's best is going to get his; there's simply not much we can do about it. But these two -- Andres Iniesta, left, and Xavi, right -- are the maestros. You could compare them to a transmission; without them, this Barca "juggernaut" is going absolutely nowhere. 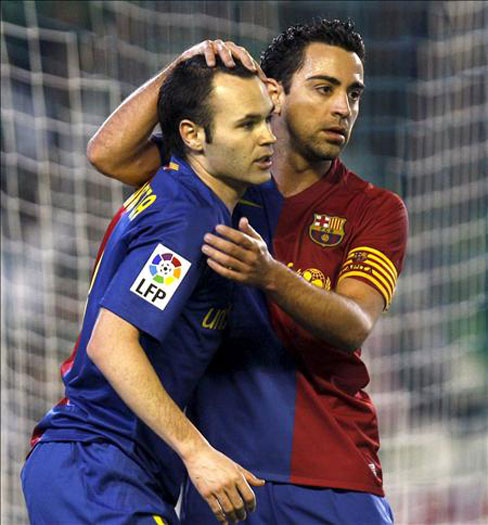 What this all means is, basically, that this match will be won in the middle of the park. Sure, one could say that about most games, but I'm telling you this one is different. Yaya Toure will likely join Xavi and Iniesta in a three-pronged midfield, leaving Europe's foremost attacking trio -- Messi, Eto'o and Henry -- to rampage.

To counteract, Hiddink will deploy his imperious three-man midfield of Michael Ballack, Michael Essien and Frank Lampard. Perhaps the Dutch master will opt for John Obi Mikel (we can only hope), but it's unlikely he'll sacrifice the German captain for the more mobile, more technical -- more effective -- Mikel. Then again, Hiddink could throw Essien on the right of the front three to accomodate both Mikel and Ballack. Who knows.

Regardless of these choices, the midfield is set up as a classic finesse v. braun clash.

Air it out
Another potential -- no, likely -- flashpoint will be Chelsea's aerial prowess versus Barcelona's often-frail back four. Set pieces will no doubt favor the Blues as well. 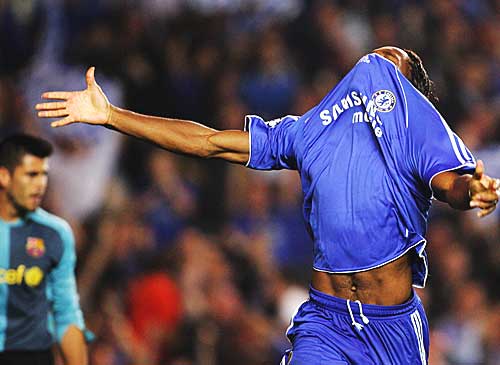 The likes of Alex, England's Brave John Terry, Ivanovic and Ballack are massive threats in the air. Then, there's the monster that is Didier Drogba. If Barca boss Pep Guardiola opts for a centerhalf pairing of Pique and Marquez, with Puyol out left, then Drogba could have a field day.

I expect a more direct approach from Chelsea at the start, with possession obvious being at a premium, and Drogba should be at the center of it -- as he usual is.

Prediction
I mean, we're playing the greatest team ever to grace a football pitch, right? So how can we even attempt to compete? I guess we should just pack it in. Posh.

While Barca are unmatched in attack, they're quite the opposite in defense. I expect Chelsea to net an away goal -- the only problem is how many will these Catalans deposit past an in-form Petr Cech? Wait, Cech's in form? Awesome.

I'm going for a 2-1 Barca win. Obviously it could be better, but I think Hiddink would be fine with that kind of result heading back to Stamford Bridge. Regardless, it's certain to be a spectacle.

Come on you Blues! KTBFFH.