Man, is it just me or has any kind of buzz revolving tomorrow's match against West Ham -- or any other Premier League match this season -- been extinguished after Wednesday's drab, goalless draw with Everton? I didn't think it was just me. 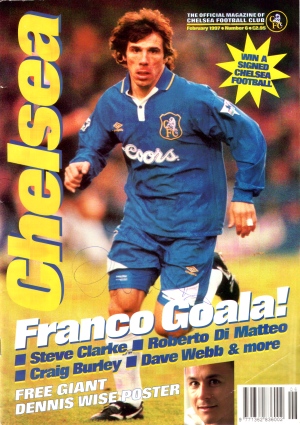 So we're pretty much out of the race for a Prem title, and a possible treble. Yeah, it sucks but it could be another one of those blessings in disguise. What this will do is allow Chelsea to focus on the Champions League, specifically the juggernaut that is Barcelona. But that's a discussion for another day -- next week I'd say.

West Ham, meanwhile, are quietly putting together a solid campaign. The Hammers, behind Zola and Clarke, have put themselves in position for a UEFA Cup Europa League (gaaaaay) place. Though there's no place for former Blues Carlton Cole and Scott Park -- due to injury -- West Ham do have a fairly talented front duo in David Di Michele and Diego Tristan.

As for Chelsea, this fixture gives us the chance to rest some key pieces for the aforementioned trip to Barcelona next week. I'd guess we'll see Essien, Malouda, even Drogba out of the side. I wouldn't think Lampard would miss out, especially considering his recent rant -- which will be discussed later. We can only hope bit players like Quaresma, Stoch and Di Santo will see significant minutes.

The main issue will be a left-back and whether Hiddink will opt to unveil his option for Barcelona, seeing as Cashley is suspended for the CL clash. Could it be Mancienne? Belletti? Who knows.

Prediction
This is, after all, a London Derby, one featuring a host of ties to Chelsea. I'd expect a focused run-out from our boys following the letdown midweek. 2-0 to the Blues.