Share All sharing options for: Match Recap: Blessing in disguise?

"If you concede because you are outplayed or outpaced you get angry but, when you calm down, you accept it ­happens in football," said manager Guus Hiddink, after Chelsea nearly blew a four-goal lead in a 4-3 win over Bolton on Saturday at Stamford Bridge.

"But when you outplay yourself… You simply cannot have that. That's why you get angry. We expressed ourselves to the players and addressed it after the game. I have been known to throw the odd cup of tea around which might be there in the locker room. Every now and then it happens. But this time they knew without me having to tell them." 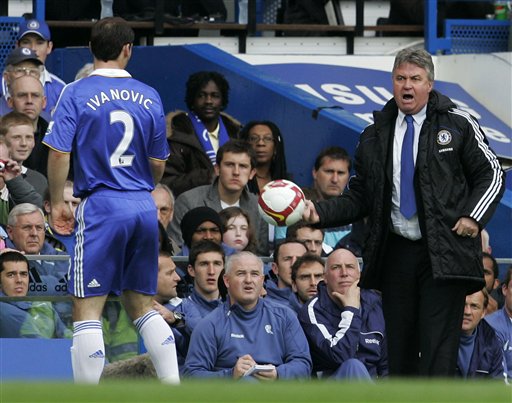 This match went from being considering to a superlative display to the bordeline ridiculous in less than 10 minutes. Chelsea lead by what appeared an insurmountable four goals after Didier Drogba bagged his second after 63 minutes. Instead, Bolton responded with a blue collar rally behind the inspired play of Kevin Davies and former McDonald's crew chief Chris Basham.

First it was Andy O' Brien, though -- who hadn't scored in four-plus seasons. Basham followed before Davies headed on for Matt Taylor to finish. And there was still 15 or so minutes remaining at the point. Only after Gretar Steinsson's effort from close-range deflected off a teammate and out with seconds remaining could Chelsea actually breathe.

Of course, those on the red side of Merseyside were licking their lips at the sight of Ricardo Carvalho offering little resistance, a panicky John Terry and a -- dare I say it -- useless Petr Cech. But lets be realistic, here.

Chelsea clearly let off the gas. Do you think a Blues side would ever do that against Liverpool? In the Champions League? Get real. Second, Liverpool doesn't have a Kevin Davies.

Third, Frank Lampard was off the pitch when Bolton netted all three of its goals. So was Didier Drogba. Oh, and Michael Essien wasn't even in the squad. A coincidence? Hardly.

The real problem with us giving up three goals to Bolton is we've given Liverpool the formula to beat us ... let Chelsea score four, in turn lulling us into a false sense of security. HA.

As for the rest of the Bolton match, Chelsea began slowly before absolutely blowing the Wanderers off the pitch for the better part of 60 minutes. Michael Ballack tallied his first league goal of the season to start it off. Lampard added a penalty and Drogs closed the scoring for the Blues with a pair.

At the back, Ivanovic once again looked fantastic -- save for missing his assignment on the second Bolton goal. Ashley Cole, once again, proved a constant threat on both ends of the pitch. Worrisome for Blues fans was the form of both Carvalho and Terry; our first-choice pairing just didn't look solid at all. It'll be interesting to see what Hiddink opts to do in central defense against the scouse.