Sure, Hull City has to oust Arsenal at the Emirates. But, really, isn't that a foregone conclusion anyway?

The semifinal draw has us facing that winner, while Manchester United and Everton will tangle. The matches will be played on April 18 and 19 at New Wembley. 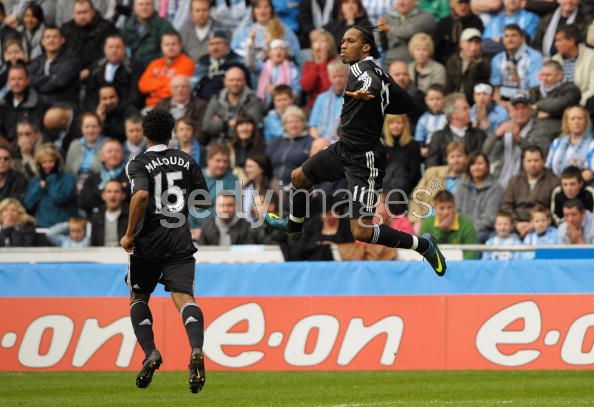 On to the analysis. And, since I'm nowhere near the writer that Dominic Fifield (the Guardian) is, I'll let him set this recap off:

"Didier Drogba will never pass off as Chelsea's secret weapon. His muscular running, staggering upper body strength to barge centre-halves from the ball, and thumped finishes into the top corner are all so familiar that opposing defenders must shudder at the mere mention of his name. Yet, with each passing game under new management, the sense swells that this team has its colossus back. His assets may not be unfamiliar, but the African appears increasingly unstoppable."

Does he ever. Drogba unleashed that vintage brutality that we've all grown to love -- and thirst for from the mighty Ivorian. The first of two goals Chelsea would score Saturday epitomized Drogba's ruthlessness. Fifteen minutes into the match, Scott Dann attempted to right fellow defender Ben Turner's lax header but only ended up getting bodied off the ball by Drogs. The Chelsea man then shunned Dann, easily out-foxed goalkeeper Keiren Westwood and thrashed the ball into the upper netting from an angle he had no real business scoring from.

It didn't get much better for the Sky Blues. Though Chelsea really didn't create much of its own, Coventry never remotely had a piece of the game. Manager Chris Coleman summed it up quite nicely: "They are back to where they were before. People expected Guus to work a miracle because he's been where he's been. He's worked for top clubs, in top international jobs, and been involved in big games. I'm not surprised at all that he's done so well straight away. Five wins in five says it all."

Lumbering Alex made sure of that fifth consecutive win in the last quarter of the game. After colliding with Drogs -- both subsequently being forced to the sideline -- the duo returned almost immediately on a Chelsea counter. The result was brilliant.

Drogs flicked on to Quaresma near midfield and he, in turn, picked out Alex with a perfect early crossing pass across the face. Alex's finish was of the coolest quality. It made up for what was a lackadaisical display from the big Brazilian, at least for me.

England's Brave John Terry was once again imperious at the back, proving he's well on his way back to regaining the form that made him the greatest defender in the world. Super Frank was his usual consistent self, while Bosingwa caught my eye for the first time in quite a while. Maybe it was because of Coleman's strange decision to go with a 4-3-1-2.

But the most significant thing we can take away from the match is the Drogs. The unstoppable force may just be back. Good news for Chelsea. Bad news for the rest of the world.

Juventus in Turin in a day. Get ready.