Well, this should be interesting. 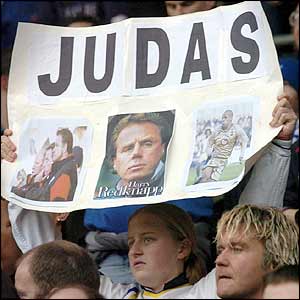 If I had to guess, I'd say it would be the Tottenham defense. Then again, 'Arry Redknapp seems to think his central defensive pairing of Jonathan Woodgate and Ledley King is one of the best in England. Is he serious?

Funny thing is, Tottenham was fairly stout defensively -- and, more shocking, disciplined -- in this season's corresponding fixture, a 1-1 draw at Stamford Bridge. But, then again, Uncle Phil was in charge of the Blues at that time -- and we all know how appalling that period was.

Good news on the player news front for Chelsea: Deco is out injured. Not that I wish harm on the guy but, my god, has he been horrid for us this season. And, to think, we all thought it was going to be rosy following that screamer he scored against Portsmouth to open the season. Joey Cole is still out as well, and our favorite Drogba is said to be suffering through something though it's believed he'll play no matter what.

As for Tottenham, I'd guess we'll see Mr. King in defense -- unless he had one of those vintage Ledley benders since there was no game midweek. Alan Hutton has also returned to full fitness, but likely won't be risked yet. Will Darrent Bent keep his place up top, or will reserve striker Roman Pavlyuchenko get his wish?

Prediction
This is going to be a tough fixture, don't kid yourself. However, with Guus in charge and the Drogba-Essien combo back in the mix, I expect no less than three points. 2-0 to the Chels.