Share All sharing options for: CL Draw: Who would've thought?

It's a miracle! No, I'm not talking about today's Champions League draw. My internet connection is back, son! 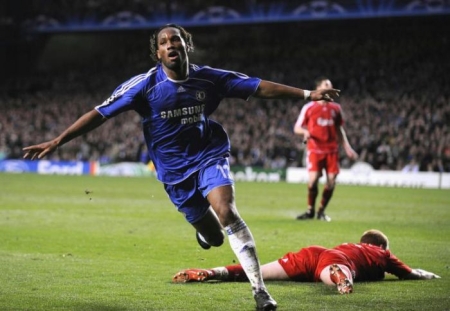 So, my best friend sent me a text message at about 9 o'clock this morning asking is I had seen the CL draw. Since 9 a.m. is more like 5 for me, I ignored and went back to doing the sleep thang. Does this story have a point, you ask? Yes.

During my return to slumber, I dreamt that Chelsea had drawn Liverpool for the 34th consecutive season (actually the fifth). How right I was.

Chelsea v. Liverpool highlights the quarterfinal round of the Champions League, to be played April 8 and 14. The other ties, all of them drab, include: Manchester United v. FC Porto, Villareal v. Arsenal and Barcelona v. Bayern Munich. The Chels-Pool winner will face either Bayern or Barca in the semifinals -- oh, goodie.

At least there's some consolation, here. Liverpool will host the first leg, leaving Chelsea in the pole position. Last season, Chelsea advanced 4-3 on aggregate despite having to travel in the return leg.