First things first, lets all thank the Scouse for their help. I mean, a 4-1 thrashing of Manchester United at Old Trafford is just what the doctor ordered, eh? Too bad it wasn't us, yes, but we'll take it anyway me thinks.

Next, to the business at hand -- a must-win for Chelsea at Stamford Bridge. 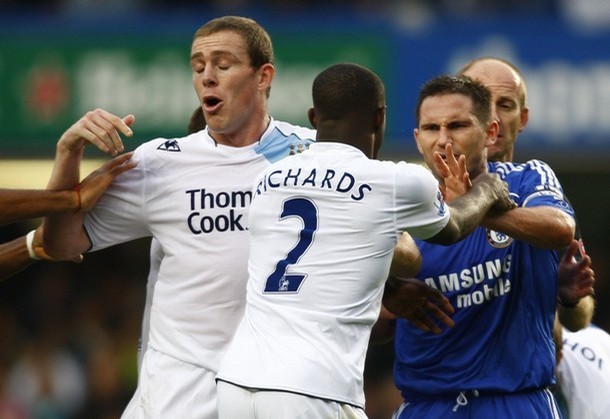 The opponent will be fellow Billionaires Manchester City and, following United's defeat on Saturday, this match represents a chance for Chelsea to remain four points adrift of the top (despite United's game in hand).

Former Blues Wayne Bridge and Shaun Wright-Phillips return to the Bridge for the first time since their respective departures. You can bet both are eyeing stellar performances in front of the Chelsea faithful, especially Wright-Phillips who was never quite viewed with revere during his time at Chelsea.

The most prudent news for Chelsea is the possible return to the starting XI of Ricky Carvalho. The Portugese defender has been absent for a loooong time with a hamstring injury, but appears fit as fit can be. If he does return, it would be rather harsh on Alex don't you think? I mean, the big man has his flaws but he's performed admirably over the past month or so. Plus, how can you bench a guy with such a cool finish? I guess we'll see.

The man we'd all like to see hit the bench ... wait, there's two actually. Get Michael Ballack and Florent Malouda out of my face. Unfortunately, neither will likely be benched. Then again, maybe Guus has had enough.

If so, expect a return to the 4-3-3 with Quaresma, who has been bright since joining on loan, joining the a front three of Anelka and Drogba. The Bison will grab that vacant spot in the center of midfield. Random note: It'll be nice to see England's Brave John Terry abuse his closest admirers.

While Chelsea are at the strongest they've been squad-wise since the preseason, Man City are suffering. Midfield pairing Nigel De Jong and Vincent Kompany are sidelined as is striker/amateur golfer Craig Bellamy. Where's Benjani and Daniel Sturridge? Oh yeah, they're injured too. I guess that leaves Felipe Caicedo up top, a guy I actually rate pretty highly.

Prediction
Last season, It & the crew came to Stamford Bridge a pretty decent side. They left battered, following a 6-0 pummeling. I expect nothing less this time around. 11-1 to the Blues.