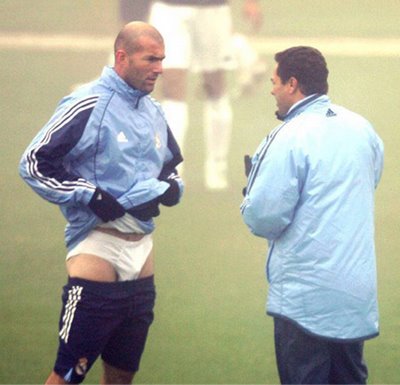 The great Zinedine Zidane has a mancrush on Steven Gerrard. How big is it? Well, he admires Stevie so much that he went as far as to call him the best player in the world at the moment. He then took it another step by comparing him to Chelsea legend Claude Makelele.

Word from Paris is that, when notified of the comments, Maka immediately cringed. Quite the disservice indeed.

Referring to Gerrard, Zidane said: "Is he the best in the world? He might not get the attention of Messi and Ronaldo but, yes, I think he just might be. If you don't have a player like Steven Gerrard, who is the engine room, it can affect the whole team.

"When we were winning league titles and European Cups at Real, I always said Claude Makelele was our most important player. There is no way myself, [Luis] Figo or Raúl would have been able to do what we did without Claude and the same goes for Liverpool and Gerrard.

"He has great passing ability, can tackle and scores goals, but most importantly he gives the players around him confidence and belief. You can't learn that – players like him are just born with that presence."

Since when did Gerrard accept playing in the shadows, doing the dirty work no one really appreciates? Oh yeah, he hasn't. Are we sure Zizou isn't referencing Javier Mascherano?