Share All sharing options for: Match recap: Bring back Shevchenko

Or Pizza Man. Or Eidur. Mutu? Kerry Dixon? Anybody at this point. 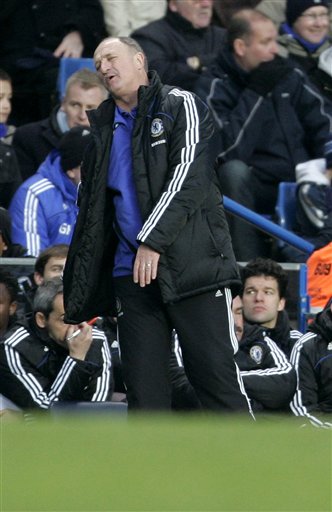 Again, Chelsea dominated for large spells. And again, the Blues left with nothing as Hull City held Chelsea to a goalless draw at Stamford Bridge. England's Brave John Terry should have opened the scoring within the first minute, but ballooned a rebound from a yard out. It was a sign of things to come. The chances slowly began to disappear and, soon after intermission, it was Hull in the ascendancy.

We just might have been lukcy to escape with a point. Funny thing, it seems as if even the coaching staff is beginning to wane. Ray Wilkins at least appears to think the title is out of our grasp: "I think you'll find 4th, 3rd and 2nd will change places a lot," he said, replying to a question about the club now sitting fourth behind Aston Villa. Hard to believe isn't it?

Kevin Kilbane hit the post with a header after slipping all too easily past Terry. Then Craig Fagan found himself with only Hilario to beat only to flounder a chip. Dean Marney may have had the best chance of the match, dragging a point-blank effort just wide of the far post after being slipped in by Geovanni. Yes, it was that bad.

It's not so much the results, either. It's the displays. Can any one player really stand up and say they played well today? More to the point, how many can say they were passionate about the match. To me, it looked as if very few actually were interested in perfoming today. And this uninspired play is becoming more and more noticeable. I won't pretend to know what's going on behind the scenes, but I think it's pretty clear something has not only affected morale but dented the ambition and self-motivation of the players as well. A mutiny? Who knows.

Enough with the bad. On a somewhat good note, Ricardo Quaresma actually started and played fairly well in his debut. The Portugese dealt with the physicality of the Premier League surprisingly well, got himself into wide positions and his delivery was solid. He nearly scored in the opening half, only to be denied by a fine stop at the far stick.

Now the bad. Quaresma was substituted in the second half for Drogba. Drogba? Not that Drogs shouldn't have come on, but for Quaresma? Ricky's ability to service the ball was mildly wasted alongside the more direct Anelka. He was never going to be a threat to attack crossing passes. And, while I agree that Ricky should not have seen 90 minutes due to lack of match fitness, he either should have played the role of impact substitute or started alongside the physical aerial threat, i.e. Drogba. Again, it's another swipe at Scolari's tactical prowess -- not that bringing on Belletti for Mikel wasn't enough evidence of that.

I actually think I'm finally fed up with LFS. I don't know about the sack, but where is the club really going at the moment? To the UEFA Cup?