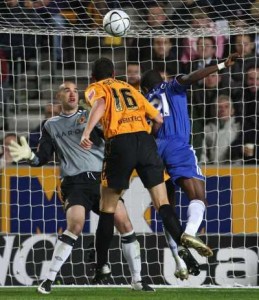 Time to get back on track, people.

Chelsea hosts Hull City this morning at Stamford Bridge, with an eye on regaining some sort of positive form following the debacle at Anfield last weekend. Super Frank has had his red card rescinded and will be in the squad, as will Ricky Carvalho -- if he passes a late fitness test. A back injury will keep Petr Cech out and thus force Hilarious into his first Premiership action of the season.

And then there's Ricardo Quaresma. The much-talked about winger will likely start on the bench, but will no doubt make his Chelsea debut at some point. How he fares will go a long way in defining this season for the Blues.

For Hull, striker Daniel Cousin will miss out as will Bernard Mendy. New signing Jimmy Bullard will travel, but won't be risked as his knee injury has yet to be fully examined.

This season's reverse fixture saw the Blues romp to a 3-0 win. Anything resembling that day will be much appreciated.

Interesting tidbit
From the Chelsea Web page match preview: "No other club has a longer history with Chelsea and Stamford Bridge than Hull. They were the opponents in the first ever competitive match on the Fulham Road on 11 September 1905 in front of 6,000. Two Pensioners scored on their home debuts in a 5-1 win: Davie Copeland (2) and Jimmy Windridge (3)."