I like Wigan. Industrious, quiet, humble, what's not to like really? Still, I wish them a beating of beatings this morning as they face Chelsea at Stamford Bridge. 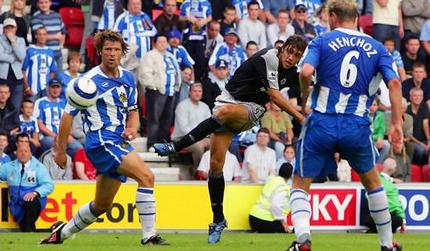 The Blues are coming off a pair of critical wins -- against Aston Villa and Juventus -- and will be looking to keep this newfound spark alive with three points against Wigan. Though in contention for a UEFA Cup place, the Latics are suffering through a wretched run at the moment. They've taken just four points out of a possible 15.

Much of that can be attributed to injuries. Again, Wigan will be without the influential Luis Valencia while Daniel de Ridder and Jason Koumas are both questionable. Mido, thanks to a patchy groin, will be out as well. Ben Watson is suspended.

Chelsea is still without the services of Michael Essien, though the Ghanaian powerhouse will play for the reserves against Villa on Monday. Ricky Carvalho is in contention, but will Hiddink replace in-form Alex? Bosingwa is suspended meaning either Michael Mancienne, Invanovic or Paulo Ferreira will fill in. I'm banking on Mancienne.

You got any thing to add people? If so, please do. And, as always, drop by and have a word -- or two -- before, during and after the match. Up the Blues!