The Old Lady. Old is right.

Juventus brings its merry band of miscreants to Stamford Bridge today for a pivotal Champions League tie with our beloved Chelsea.

The match will mark the return of his humbleness, Claudio Ranieri, to the old stomping grounds. Ranieri last roamed the Bridge in 2004, a year in which the Blues reached the CL semifinals. The man who brought Frank Lampard to Chelsea will no doubt be well-received by the supporters. 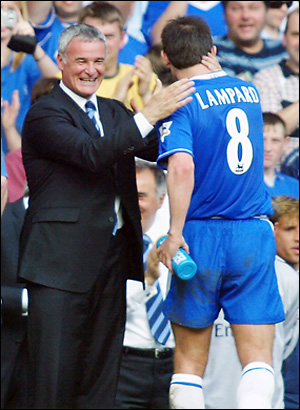 On the with the proceedings.

The Bianconeri
Juventus certainly presents a serious challenge. Not only do they sit second in Italy's Serie A, but they boast a pair of wins over Real Madrid this season -- during the CL group stages. They are, however, experiencing a rough patch, having won only two of five matches.

Old man Del Piero and Brazitalian Amauri are formidable up front, if these are the two that make the XI. David Trezeguet, however, could be the x-factor. Perhaps the most significant news for the Lady, though, is the prospect of having Giorgio Chiellini in the center of defense. The Italy international made a stirring return to the lineup on the weekend against Palermo following an extended spell out with a thigh strain.

Hiddink's men
The Dutchman made an immediate impact in London, leading the Blues to their first win at Aston Villa in nine matches. There was, more importantly -- at least to me -- an air of passion and drive about the team. That's something, my friends, which has been missing for quite some time. Oh yeah, Hiddink also broke out an unique 4-4-2 formation with Drogba and Anelka up front and Kalouuuu in an attacking mid position. And it worked.
What's this mean for Chelsea? Momentum. Positivity. And, hopefully, a run the likes of which we haven't seen since The Special One was hushing opposing crowds.
Ricky Carvalho and Michael Essien are, of course, still out. But Ashley Cole will return -- and should make a massive difference. Anelka and his 21 goals will no doubt slide in alongside a revigorated Didier Drogba to form the single most imposing strike duo in the history of man.

Signs (no Mel Gibson)
All signs point to a positive result for Chelsea. Juventus have lost their last six road matches in the Champions League, sans the group stage. The past two have been losses to English sides -- first Arsenal then Liverpool. Juve has also lost six of their past seven meetings with English clubs.

Prediction
This is a wildly tough match to call. So I'll go with my heart and say 1-0 to the Chels. Lampard to do the business all over Sissoko's lame a$$. It will be an extremely tight, and probably monotonous, opening leg.

Let me know what you think will happen. As always, drop by and have a word before, during and after the match. Cheers, bitches.