Wow. Some pretty good news in the light of all the depression at Stamford Bridge.

Chelsea, somehow, have secured the services of Portugese international Ricardo Quaresma on loan from Inter Milan. Here's how the Chelsea official Web page put it: 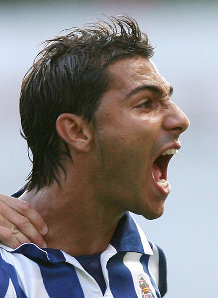 "Chelsea Football Club is delighted to announce that we have signed Inter Milan winger Ricardo Quaresma on loan until the end of the season. The Premier League have confirmed the deal.

Quaresma joins us as the sixth Portuguese player in the first team squad, following the summer arrivals of José Bosingwa and Deco, who have also worked under manager Luiz Felipe Scolari at international level."

Quaresma, who has endured a tumultous start to life in Italy under former Blues boss Jose Mourinho, will no doubt add some much-needed width and, perhaps more importantly, flair to our current side. Of course, he's also worked with Big Phil before, too, so that should ease his transition. And, yes, he has to be better than our current wide options. Doesn't he?

Personally, I've never rated Ricardo. He's too erratic and, at times, the most selfish player on earth. However, on loan, it's a win-win for the Blues. If he fails to adapt, send the show pony back, no harm done. However, if he proves to be an asset, he might just assist in winning some hardware this season -- which, I must admit, looks unlikely at this point.

Then again, the over-tactical style of Serie A might just have been his worst nightmare. Who knows, maybe the high pace of England will better suit his style. Only time will tell. Hell, recreate that outside-of-the-boot howitzer you scored against us in the 2007 Champions League when we play the Arsenal and I might just change my view, Ricardo.

Couple questions. 1. Will he be eligible for the CL. I know he played something like five games for Inter in the group stages, but the club left him out of their squad for the knockout stages. Have we submitted our roster yet? Is he eligible? 2. is this a view to a permanent deal. No such statement was made from either club, though Sky says we do have an option of buying.

Anyway, lets welcome Ricardo to the club. Wish you the best, lad. Here's to ripping apart opposing defenses in the near future.