Share All sharing options for: Match Report: Nico is 'golden'

Well, that was surprisingly entertaining.

Following 70 some minutes of mindnumbing football, things finally livened up at Vicarage Road. Watford substitute Tamas Priskin scored with his first touch of the match. It was looking rather bleak for Chelsea at that point.

Then caretaker manager Ray Wilkins did something Luiz Felipe Scolari failed to do in seven months at the bridge -- adapt. Wilkins pulled off defensive midfielder John Obi-Mikel and threw on young winger Miroslav Stoch. The result was three goals in 15 minutes and a place in the FA Cup's sixth-round draw. 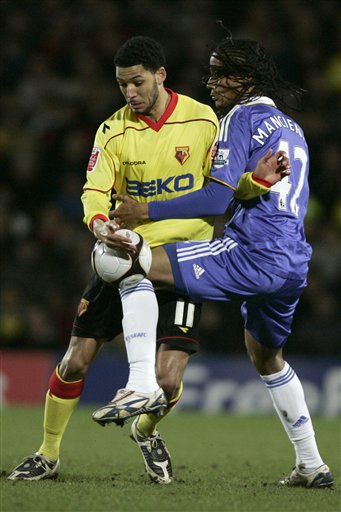 Nicolas Anelka was responsible for all three strikes, the first with his left foot. The second came from his head and the third off the right peg. It was quite the perfect hat-trick. But it all comes down to Wilkins, whose switch to a 4-4-2 with Drogba and Anelka at the point -- something Scolari said would never work -- proved the decisive factor.

Drogs was on from the start, flanked by Salomon "I don't really know what it is I'm doing" Kalou and Anelka. Of course, it was rather ineffectual. Drogba, shockingly, was up for it and nearly found a way past Watford keeper Scott Loach within eight minutes. Still, Anelka was cast away on the flanks and rarely provided any substance during the first half. The two did, however, link up just before the interval with Drogba knocking on for Anelka to clip the inside of the far post. Unlucky.

The opening 20 minutes of the second half were drab. Then Priskin struck out of nothing.

Wilkins showed his mettle by ignoring the likes of Deco and Quaresma in favor of Stoch. The Slovakian rewarded the manager by displaying a genuine threat to get to the byline. His play also freed up space for Drogba and Anelka, the later taking full advantage. Speaking of youngsters, Michael Mancienne rose to the ocassion in his first senior-team start. In at right fullback, the 21-year-old Englishman was composed in defense and bright in attack. More importantly, he had this look of confidence about him -- like he had been playing in the side for years. Certainly a major positive going forward.

Now for the negative. Two words: Michael Ballack. I've been patient. I've been supportive. Not anymore. Yes, Ballack really flourished at the end of last season. This year, he looks nothing like the same player. Slow, stagnant, the German seriously looks inept. I don't know if it's his role or what, but it's time for Ballack to be dropped. Quite sad, really.

Next up for the Blues is a top 4 clash with Aston Villa at Villa Park. It will be Guus Hiddink's first match in charge of Chelsea -- and it's basically a must-win. Here's to hoping this little result right here with be a springboard for the rest of the year. Up the Blues.