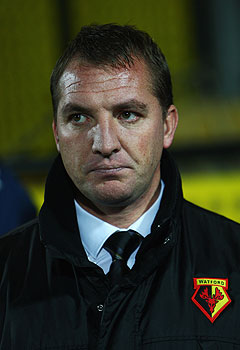 So the Hiddink era begins. Well, not really.

Ray Wilkins -- or Mouthpiece as I like to refer to him as -- will likely be stirring the pot today as Chelsea visit Hertfordshire to take on Championship club Watford in the FA Cup's fifth round. Our new main man, Guus Hiddink, will likely be observing from a plush sky box or the like.

On with the match preview. There are plenty of ties between these two clubs at the moment, making this tie even more enticing.

Of course, there's Watford manager Brendan Rodgers who just a few months ago was in charge of the Blues' reserves. Then there's Frank Lampard Sr., a consultant for the Wasps. I'm sure the Franks are having a ball with this. On-loan Jack Cork is ineligible to play against his parent club so all's not gravy.

EBJT will miss out because of a ban, while Ricky Carvalho is still on the mend. Petr Cech likely will return after his short stint on the sideline because of back problems.

As for the match, it should be interesting. I doubt will cruise -- as we haven't all season in any competition. I expect a win, but nothing outlandish. Let's right the vessel, then worry about dominance. As always, hit me up with your thoughts before, during and after. Be well.