Hiddink next for 'poisoned chalice'

Share All sharing options for: Hiddink next for 'poisoned chalice'

It's official. Guus Hiddink doesn't care about his friendship with Roman Abramovich. The Dutchman is the next manager of Chelsea Football Club.

"Chelsea Football Club is delighted to confirm Guus Hiddink will become temporary coach until the end of the season. He is due to meet the players later this week." 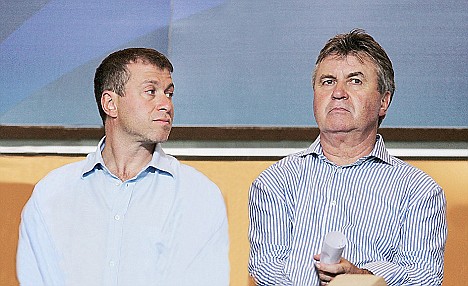 Let me be the first to welcome Guus to the family and wish him the best as he embarks on what will certainly be a difficult and testing journey. As has been said, he's now the one holding the chalice poisoned by the one known as The Special One. With that being said, the Dutchman said he would in fact consult recently-sacked Luiz Felipe Scolari for advice on how to approach his new job.

"I haven't done it yet but I will call him in the next day or two," Hiddink said. He's also understood not to be worried in the slightest about the task ahead. Of course he isn't. He's Guus Hiddink.

"It's never enough time to prepare a team in one week but this is an exceptional situation," Hiddink said. "Chelsea have good players and they should be in top form and that should make my job easier."

Hiddink takes over Chelsea on a temporary basis until the end of the season during which he will remain in control of the Russian national team. Many have questioned Hiddink's ability to excel in a dual role despite previously doing so with Australia and PSV -- two lesser demanding positions but big jobs nonetheless.

The 62-year-old has said he is committed to the Russian national team and their bid to qualify for the 2010 World Cup in South Africa. However, today he did not rule out the possibility of extending his stay at Chelsea providing there is success.

"There are two scenarios," Hiddink relayed to Radio 538 in Holland. "It goes bad and they say 'go back east' or it goes well, but I'm not thinking that far ahead."

Neither are we, Guus. We just want some wins.