Hiddink "in talks" with Chelsea

Share All sharing options for: Hiddink "in talks" with Chelsea

A myriad of media outlets are reporting that Chelsea has received permission from the Russian Football Union to open talks with Guus Hiddink over the vacant managerial position at Stamford Bridge. If Hiddink were to take over, it would be on an interim basis -- as the RFU do not want to release Hiddink from his job as Russia coach. 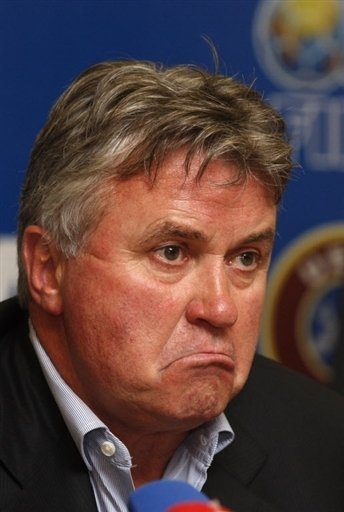 "Chelsea Football Club can confirm it has officially approached the Russian Football Union (RFU) for permission to speak to Guus Hiddink to become the club's temporary coach until the end of the season while continuing to be in charge of the Russian national team," said a Chelsea statement. That permission has been granted and Chelsea would like to thank the RFU for their co-operation."

Earlier Tuesday, Hiddink spoke with Reuters about the situation and confirmed he had been in talks with Chelsea about the position.

"I must say that this is an exceptional situation. If it was any other club aside from Chelsea my answer would be a straight 'No'," he said. "But Chelsea is different because I have good relations with the owner. So I would like to help them in this situation if I could.

"No, this would be a full managerial role, a day-to-day job. But this would only be for the next two or three months until the end of the season. Of course when Russia play [World Cup qualifiers] I would go there to coach them as there won't be any [league] games during that time. I have already done that [combining two jobs] a couple of years ago when I was coaching Australia and PSV, so I'm familiar with the situation and what it takes."

So, it looks like all that is left between the two sides is agreeing a contract. At least we know Hiddink can handle this type of situation, already doing it -- and thriving in it -- with Australia and PSV. Don't forget, he nearly got PSV off all clubs into the Champions League final during the 2005 season. Also, an interim move at this point seems spot on. It allows us to the fill the gap on a temporary basis, with a man of outstanding repoir, without the pressure of a knee-jerk hiring. It's also allows the board to research candidates for the rest of the season, which sets us up the possibility of having someone in place very early in the offseason -- allowing us to not miss out on significant transfer targets.

Plus, maybe Hiddink can get some of those young Russian guns to sign up at the Bridge.