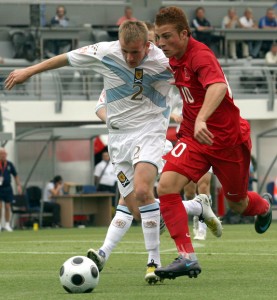 Who said we wouldn't sign anyone during the January window?

Personally, I remember very little about this kid. What I do recall is that he had put in some pristine performances during the U-17 tournament. Probably will slide in as a winger for us. Has excellent technique and crosses the ball well. Who would've thought, we have purchased a player with attributes which we need. Bonus!

Supposedly Töre, who is German-born, was out of contract at Bayer and we snatched him up on a free. I don't know how true that is, but if so that's a good piece of business by the club. Shocking, I know.

If that's not the case and we did throw a couple million at Bayer for this kid, you have to ask why we didn't use those funds to strengthen the first team? I guess we'll never know.

Remember that kid we lured to Chelsea by literally landing one of Roman's helicopters in the middle of a training ground? Well, that youngster is Vincenzo Camilleri and he's already out at Chelsea.

Less than a year after joining the Blues at age 15, Camilleri is heading back his original club, Reggina.

His departure is allegedly part of Chelsea's cost-cutting measures in which a host of youth players will be receiving the axe.