CFC non-team of the decade

Share All sharing options for: CFC non-team of the decade

The Chelsea Offside Team of the Decade will be revealed shortly, along with our reader XI. It should make for some fantastic reading/comparison -- unless they're the same, which would in fact be a-mazing.

For now, however, I'd like to focus on the other end of the spectrum. Specifically, some of the rubbish that has dawned the blue, white, eletric yellow, and whatever other color you want to mention in the 2000s. Here, my friends, is the Chelsea Offside's non-team of the decade.

Goalkeeper
Neil Sullivan (2003-04)
Sullivan spent 12 solid seasons at Wimbledon, establishing himself as one of the best goalkeepers in England. He was even marked by Sir Alex Ferguson as a potential replacement for the great Peter Schmeichel when he prepared to leave Wimbledon at the end of the decade. He first moved to Tottenham in 2000 before travelling across town to Chelsea for a solitary season in 2003-04. He made just eight appearances for the Blues during a truly forgettable tenure. 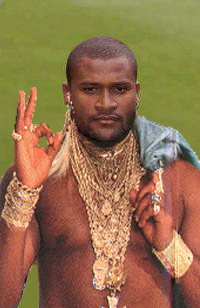 Winston Bogarde (2000-04)
What would a worst list be without the engaging Dutchman? Bogarde arrived at Chelsea from Barcelona on a free transfer, though no one's quite sure who actually signed him. It certainly wasn't then-manager Gianluca Vialli, who was replaced by Claudio Raineri just weeks after Bogarde's signing. Raineri wasn't a fan of the Dutch defender, and furiously attempted to offload him. It wasn't going to happen. Bogarde, who was on a salary of £40,000 per week, refused to leave the club, opting rather to enjoy the bench, then reserves, instead of sacrificing such a lucrative deal. He retired in 2005 at the end of his contract, making just 11 appearances in four seasons with the club.

Khalid Boulahrouz (2006-08)
More Dutch. Nicknamed "The Cannibal," Boulahrouz was quite the shock signing. He arrived just 10 days before the end of the 2006-07 summer transfer window for a cool £7-8.5  million. His career began brightly, highlighted by a sterling performance against Barcelona in the Champions League. But it quickly spiraled into the depths from there. He was considered such an appalling prospect by then-manager Jose Mourinho that, rather than choosing a natural defender like Kahlid during our yearly injury crisis, The Special One opted for midfielder Michael Essien in defense. The Dutchman's tenure reached its low point against Arsenal in May, when his defensive blunder not only got him sent off but gifted Arsenal a penalty -- and ultimately Manchester United the Premier League crown.

Asier del Horno (2005-06)
Asier joined Chelsea for a fee of £8m in June 2005. He was to be the answer to all our left-sided defense problems. Hardly. Though del Horno played 34 matches during his one season in West London, many were of the forgettable variety. The highlight of his stay: an abominable Champions League evening in Feb. 2006 against Barcelona, one in which Asier was embarrassed by a young Leo Messi. He was eventually shown a straight red card for a ludicrously wild lunge on the current FIFA World Player of the year -- and Chelsea were eventually eliminated from the CL.

Midfield
Enrique De Lucas (2002-03)
As the Daily Mail put it: "Looked and played like Russell Brand for one bizarre season."

Maniche (2006)
When it comes to debuts, Maniche's may take the cake. Against West Ham, the Portugese allowed a goal, hit the crossbar and was shown a straight red card. Luckily Chelsea still secured a wild 4-1 win. He may have been just a loan signing, but you simply cannot ignore that kind of futility. Needless to say, Chelsea refused to make the deal permanent. 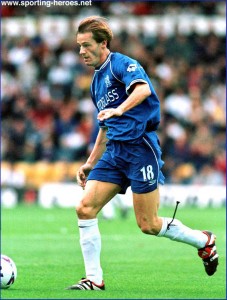 Gabriele Ambrosetti (1999-2003)
Vialli signed Ambrosetti, who he deemed the "Italian Ryan Giggs," for £3.5m in August 1999. Four years later, the man had just one goal -- a stunner as a substitute in a 5-0 Champions League rout of Galatasaray in Istanbul during his first season with the club -- in 16 appearances.

Juan Sebastian Veron (2003-2007)
Veron was the Premier League's record signing, at £28.1m, when he joined Manchester United in July 2001. Two underwhelming -- an understatement -- seasons later, he moved to Chelsea for £15m. If anything, our signing was worse given the fact that Blues management already knew he had failed to adjust to the English game. He made just 14 appearances in blue. 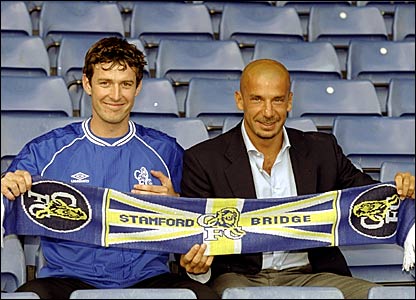 Chris Sutton (1999-2000)
What a famed position striker has been for the Blues over the past decade. The likes of Kezman, Shevchenko, Mutu, Forssell, Pizarro, the Carlton ... the list goes on and on. Yet only one is a concrete choice here: Sutton. Sure, he barely made it into the 2000s, but you can't overlook the Englishman. Sutton was always amongst the goals for his first two clubs, Norwich and Blackburn. Then he joined Chelsea for £10m -- and promptly scored one goal in 28 league appearances. He made his debut in the Blues' famous 5-0 demolition of Manchester United, missing a host of sitters in the process. Personally, I don't think he ever recovered from the flacid performance.

Andriy Shevchenko (2006-09)
Tough decision, this. I love Sheva, I really do. But, considering his price tag (£30.8m), the fact Mourinho simply did not want him and his ensuing impact, he must be among the first XI. Though the Ukranian opened his Chelsea career in style with a goal in a 2-1 loss to Liverpool in the Community Shield, he never lived up to the billing -- despite being as professional a player I've seen. His limited impact was matched only by his limited appearances (nine goals in 48 league appearances). Even a loan back to AC Milan could not resurrect the man's once-incendiary career.

Adrian Mutu (2003-04)
Do we really even need to discuss this one? Mutu joined Chelsea from Parma for £15.8m as part of the Abramovich revolution. He scored four goals in his opening three matches for the club; he managed just two more before being sacked for failing a drugs test.