An undeniable since of insecurity swept through my apartment like a bristling winter storm -- coincidentally right after an actual winter storm had trapped coworkers, along with myself, in our powerless office two days earlier -- prior to Sunday morning's lesser-celebrated, but always turbulent London derby with hosts West Ham at Upton Park. 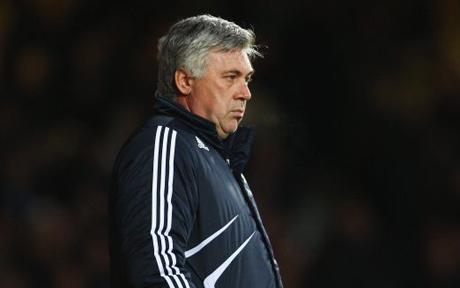 It was a feeling well warranted. A 1-1 draw, secured following Frank Lampard's trio of converted penalties of which only one was recorded, means Chelsea has now one just once in six matches in all competitions. This has been a striking turn of form, particularly since it has arrived on the other side of a 3-0 trouncing of Arsenal at the Emirates that appeared to signal the end for all English clubs interested in contending for a Premier League title this season. Wrong.

Is it time to panic? Let's look at both sides of the coin.

Yes
Perhaps the most alarming statistic during this rough patch is that three of the six matches during this "blip" have been against current relegation candidates. Everton (draw), Portsmouth (unconvincing win) and West Ham (draw) all reside in the bottom bottom six.

Compounding matters is the way in which the team is suffering. Defensive frailties, specifically on set pieces, have surfaced as they did under Scolari, and the team has been unable to reinvent itself under straining conditions (again Scolari).  Michael Essien's absence has certainly be felt and, with the African Cup of Nations nearing, his loss will be coupled with that of our most feared player this term: Didier Drogba.

Could it get even worse? Most certainly. Holiday fixtures, against in-form sides Birmingham City and Fulham, will test not only Ancelotti's managerial weight but the players' resolve as well.

No
A run of this extent in any of the previous two seasons would have been catastrophic. This term, not so much. It's difficult to panic when challengers are struggling mightily to pose a challenge.

Manchester United lost for the second consecutive week, albeit with a severely depleted team. Even at full strength, the reigning champions, have been far from convincing -- especially without the likes of Carlos Tevez and Cristiano Ronaldo. Arsenal, despite winning at the weekend, drew with Burnley in midweek -- and have already been easily dismissed by Chelsea. At home.

Unlike Scolari, who was languishing in fourth, seven points adrift of first-place Manchester United at the time of his sacking, Ancelotti has the comfort of a four-point cushion at the top of the league. Of course, recent displays are unsettling -- at the very least -- but who can argue with the position?

What side do you favor?