The fine folks over at Footy Factor beat me to it this bit of well-clothed information -- well done, good sirs -- but this tiny footnote had actually struck me right after the League Cup tie with Blackburn.

So the Blues have lost three matches this season (@ Wigan, Aston Villa, Manchester City). They've also been eliminated from the Carling Cup on penalties by Blackburn. You know all this. But do you know the one constant over all four defeats?

Why the kit, of course. That dreaded neon-navy concoction to be more precise. 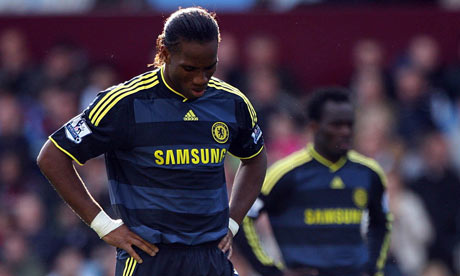 Drogba, either staring at his junk or lamenting how awful this kit is.

Yes, Chelsea has played four matches this term in what has been designated our away kit for 2009-10. Aaaaaand the Blues have lost all four. More over, three players -- Salomon Kalou, England's Brave John Terry and Ashley Cole -- have suffered injuries wearing that ghastly ringer.

Superstitious or no -- I'm not, usually -- to hell with this kit. Blue and white for the rest of the season, I say.

What do you think? Hogwash? Burn it?