Share All sharing options for: Wenger's a clown. Part Deux.

So Arsenal supporters aren't too happy with my analysis of Arsene Wenger's comments following their club's 3-0 defeat to Chelsea at the Emirates on Sunday. I'm so sorry.

They seem to believe their beloved leader was, in fact, praising the mighty Didier Drogba when he said in the post-match press conference: "He is a good player but it is funny because he does not do a lot," Wenger said. "He is efficient in what he does. You would be surprised by the number of balls he touched today. Drogba is a great player, no one can deny that, but he is in a period when he kicks the ball it goes in."

He digs a little deeper, adding: "You can't tell me that for the first goal, the ball went where he intended it to go. At the moment he just goes for it and it goes in. The first was the goal of a striker in complete confidence." 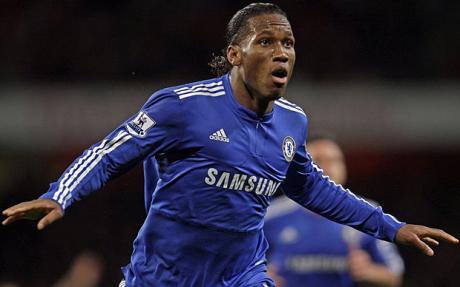 Doesn't do a lot.

Voyeur is complimenting the Ivory Coast striker, who now has scored 10 goals in 11 appearances against Arsenal?! Seriously?

Lets just say Wenger was attempting to portray Drogba in a positive light -- never, but whatever, I'll roll with it for now. The first sentence of his quote completely wipes out any chance of that. "He doesn't do a lot" ... let me see, what you're saying is Drogba is efficient with the little that he does, right Arsene? Well, that's rubbish. The main point here being that he does do a lot for the team; the man defends set pieces, holds up play and tracks for the ball continuously. Don't believe me? Check the stats.

Via the Times ... "Wenger’s claim that statistics would bear out his point about Drogba’s limited contribution was wrong as well. He attempted four shots, two more than anyone else. He created two chances, as many as anyone. He touched the ball 48 times, more than Eduardo da Silva and Carlos Vela combined. He even made three clearances — no other forwards made any."

And this doesn't include the amount of times Drogba popped up in the opponent's penalty area, mainly to defend set pieces. Shall we dismiss this argument? Surely.

Martin from Arsenal Offside suggested my decision to use the Guardian's article on this subject as support for my argument was a poor one, seeing as the Guardian isn't the "gospel." Martin also asks: "when did telling the truth become 'being a sore loser?' Poor, Martin.

Telling the truth would require telling the truth. Wenger didn't, simple. From Drogba not doing a whole heck of a lot while on the pitch, to not meaning to score goals; it's really a farcical comment through and through. The history of Wenger backs up that view even further. Didn't this guy try to fight Alan Pardew on the sideline a few seasons back? Ridiculous.

It's all become a bit tired from the Frenchman, too.
-Poor officiating
-Anti-football
-Bad luck
-Cloggers
Can we get some fresh analysis, Arsene? How about "not good enough"?

As for your other complaint, Martin, I decided to delve into the web to see if it was just the Guardian and myself who viewed Wenger's comments in this light. Not quite as it turns out. Let's run threw a few of these, shall we?

I. The Daily Mail -Sorry Wenger, your Arsenal boys are just roadkill
Key quote: "When he said that Didier Drogba, scorer of two goals, did not actually do much, there were some in the room listening for sirens in the distance. Drogba did exactly what Arsenal as a collective entity did not do, and may not do for some considerable time, unless Wenger can devise a way to play without a match-defining goalscorer."
Read more.

II. The Sun - Just what did Didi do then?
Key quote: "It has often been said Arsene Wenger needs his eyes tested. Well, after this 3-0 hammering by Chelsea it seems the Arsenal boss needs his head examined."
Read more.

III. The Times - Drogba is simply peerless
Key quote: "Wenger’s sour grapes may stem from the fact that he turned down the opportunity to sign Drogba for £100,000 when the striker was at Le Mans eight years ago, a decision that has repeatedly returned to haunt him."
Read more.

IV. The Telegraph - Arsenal torn apart by Chelsea's heatseekers
Key quote: "Heard the one about the world-class striker who doesn’t do much? It is a measure of the madness football can induce in those who care too much that Arsène Wenger saw in the performance of Didier Drogba efficiency, not grandeur. It is a bit like dismissing Pele as nothing more than a goalscorer."
Read more.

V. The Guardian - Wenger needs stronger players -- not small-mindedness
Key quote: "Given that context, anything Wenger said on Sunday was bound to sound specious or self-serving. It would have been too much to hope for magnanimity, but he ought surely to have been able to bite his tongue so he did not lapse into the small-minded downgrading of Didier Drogba."
Read more.

VI. The Times - Wenger has a blind spot - even if he can't see it.
Key quote: "All managers moan. But Wenger is too keen to deflect attention from his own failings and those of his players."
Read more.

VII. The Independent - Drogba brushes past Arsenal's feeble challenge
Key quote: "Wenger said that decision had changed the course of the match and that Drogba had done little of note. It was wild and whirling stuff from the Arsenal manager. He would find few among his own fans who would agree, especially not the bloke who kept asking Drogba to sign his programmes. The kindest thing we can say about such an intelligent football man is that Wenger was simply traumatised by what he had seen and was temporarily incapable of facing the truth."
Read more.

You know, this is kind of fun. Do you want more?