Are you havin' a laugh? Wenger says Drogba doesn't do much

Share All sharing options for: Are you havin' a laugh? Wenger says Drogba doesn't do much

We all know Arsenal manager Arsene Wenger is the sorest loser in world football. However, he took his delusional tirades to new levels following his side's 3-0 defeat to Chelsea on Sunday at the Emirates Stadium.

Not only did Wenger dismiss the idea that this was men against boys - anyone who saw Didier Drogba shrug off a flailing Armand Traore late in the second half, a challenge that sent the young fullback flying at least two meters, would favor the analogy - he sunk even further with suggestions that the Ivory Coast striker doesn't do much. 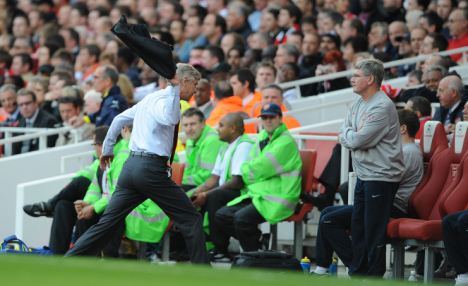 "He's a good player," Wenger said of Drogba. "It's funny because he doesn't do a lot but he is efficient in what he does. You would be surprised by the number of balls that he touched today. Drogba is in a period where he kicks the ball and it goes in."

This is breaking new ground. Sure Drogba was not at his bulldozing best but the man, who now has 14 goals in 17 appearances this season, was certainly a cast above the Arsenal frontline.  Let us not forget, Drogba has netted 10 times in his last 11 appearances against Arsenal. I love me some lazy.

Lets put it this way: If Drogba doesn't do much as Wenger suggests, then what in the hell does his little Croatian teddy bear (Eduardo) do exactly? Inquiring minds want to know.