This, my friend, is the very definition of big. London's oldest top-flight derby resumes Sunday when Chelsea visit the Emirates to face Arsenal. It's third versus first, the league's highest-scoring attack against its best defense.

More over, this match represents a chance for the Blues to pull 11 points clear of the Gunners at the top of the domestic table.

Chelsea have lost just one of its last five trips to the Arsenal. Arsenal are undefeated in five at the Emirates this term, but have won just two of its last 13 meetings with the Blues.

To quote the greatest video gamer of our -- or any -- generation, Leroy Jenkins: "Let's do this." 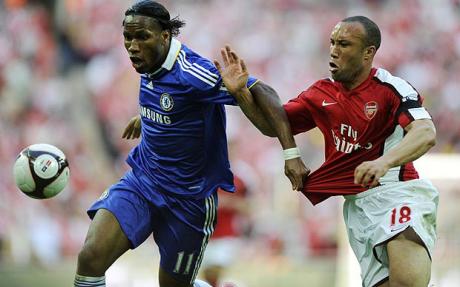 Team analysis: Frank Lampard is supposedly fit after recovering with the quickness from the thigh injury suffered in traning with England. He turned his nose up at placenta treatment, instead choosing to rely soley on the force to recover. It worked. Deco and Ballack also are fit, giving Carlo Ancelotti the proverbial selection headache ahead of Sunday. He has a slew of difficult decisions to make, especially with the likes of Florent Malouda and Mikel thriving of late. Essien also displayed the full 'arsenal' when give a more advanced role.
Regardless, I think CA continues with his most trusted side so far. Me personally? I'd draft in Mikel and put Essien on the right, but that's just me.

Match quote:
"Winning (the Premier League) with Chelsea will be even bigger than when I did it with Arsenal. That will mean I'm in one of the biggest teams in the world. When I won it with Arsenal I did appreciate it at the time. Sometimes you only have one chance in your life. I had this chance before and now I have a second chance to win it again.
"I have had a lot of time to wait to win something again in England. I won the FA Cup last season and I hope this season I will win the title. I don't know if this team are better than the Arsenal one I played in. Arsenal were strong but this Chelsea side are strong, too. I did it with Arsenal and I can definitely do it as well with Chelsea."
-Nicolas Anelka

Potent Potables
•  Arsenal have won just four of its last 19 matches with top-seven clubs.
• Drogba has started eight of Chelsea's last 11 games against Arsenal. Chelsea has one seven. The Blues have lost two of the three games he has missed.
• Arsenal have lost just one of the 20 league matches Arshavin has started for the club.
• Arsenal have kept one clean sheet in their last six league games.
• Via chelseafc.com ... "Chelsea have scored in every game since the 0-0 draw at Barcelona's Camp Nou in April, 27 matches ago. Find the net on Sunday and it will break the previous club record run of a Blues goal in every game, set between August and December 1985."