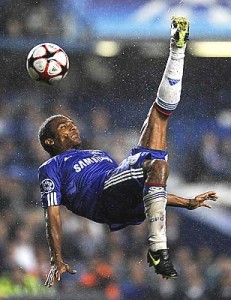 The calm before the storm. Or is it?

Group leaders Chelsea have travelled to Portugal in advance of Matchday 6 of the Champions League group stage . Second-place FC Porto will be the host. The match represents the first of a four-game gauntlet, one that features league matches with both Arsenal and Manchester City as well as a Carling Cup semifinal against Blackburn.

With qualification for the knockout stage of the CL already clinched, this match would seem an appetizer for the difficult stretch to come. However, a Porto win would see Chelsea dip to second with only a match remaining in the group. A quality result is certainly needed here.

Analysis: Great to see Kakuta rewarded for his fine display on the weekend. I doubt he'll make the squad, however, seeing as he was just out for the reserves. Drogba is unlikely to start, due to the rib injury, but a late run-out would be ideal. Ballack is also back, and could work his way into the starting eleven. So, too, could Deco.

Pre-match quote:
"It's four away games in a row and that's the challenge major title-winning teams rise to. We know what it takes to win major titles and it is winning runs, periods when you keep on top, striding from result to result. If we beat Porto, we win the group with a game to go. Not many teams win in Porto but we can do it.
"Then it's Arsenal and Manchester City in the league. Arsenal will be doing the maths; they are eight points behind with a game in hand. We've had some good results there since Wayne Bridge's winner in the Champions League in 2004 and another one could cement our position at the top of the table.
"City are serious top-four contenders and, like Porto, are very strong at home. We have a great record there and these are the games when we can really make the difference. Victory, too, at Blackburn and we're in the semi-finals. On the two occasions we've won the Carling Cup recently, we gone on to win the Premier League in 2005 and the FA Cup in 2007. It's the appetiser."
-England's Brave John Terry