Share All sharing options for: Breaking: Kalou shows some fight

Chelsea forward Salomon Kalou and Abdoulaye Meite were both in the Ivory Coast squad to face Germany in Wednesday's international friendly (2-2 draw). Neither was available for Saturday's World Cup qualifiying win over Guinea after the two went all hyphy on each other in training. The two have since made up (awww).

Sealed records, made exclusively available to Chelsea Offside, indicate Kalou won via side choke in the third round. 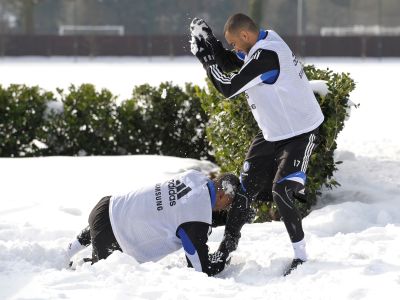 "Things got a little heated but we are human and these things can happen to us," West Bromwich Albion defender Meite said. "But in the end we understood that we have to preserve the spirit in the squad and so it's all forgotten now."

Kalou -- who, despite still holding child-like weight (what do you think? 120lb or so)  looks to have added some sizzle (aka definition) to his frame --  admitted being in the wrong. S***, I'm just glad to see him show some spark.

"Meite is a big brother, I have apologised and he has accepted it," Kalou said. "It's a pity that it was between Abdoulaye and myself. We were punished and I have accepted that and that's how we move on. You recognise your mistake and you learn - we've talked and its over."

Talks between UFC head Dana White and Kalou's representatives have yet to take place.