Just a few short weeks ago, Chelsea appeared the strongest team -- at least squad-wise -- in the English top flight. How quickly things can change.

Following this weekend's international break, the list of those on the treatment table has grown exponentially -- and not simply from lining up for their respective countries.

Frank Lampard pulled out of England's friendly against Brazil in Qatar before it even began. In fact, he was done immediately after de-boarding the flight. Yes, Super Frank could be out anywhere from three weeks to eight (according to reports) with a thigh tear apparently picked up because of poor seating on the airplane. Seriously? Maybe we should blame the FA for this farce.

Then there was England's Brave John Terry, who also failed to make it safely into England's squad for the Brazil friendly. A swollen ankle in training prevented his participation. Who knows how serious this is, and how long Chelsea may be without its captain. 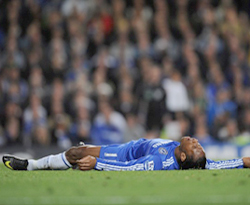 And, now, I'm reading that Didier Drogba could be sidelined for up to three weeks with a broken rib? Maybe I'm late on this, but come on. The Sun suggests a scan by Drogba's home nation, Ivory Coast, revealed the damage; that would appear legit considering the striker was held out of the country's World Cup qualifier against Guinea on the weekend.

All this on top of the loss of fullbacks Ashley Cole and Jose Bosingwa. Bos will miss three months; Cole's layoff is unknown, though we know -- thankfully -- that his injury does not require surgery.

Where does this leave us? Well...

Looking ahead two weeks to a pivotal match against second-place Arsenal, we could potentially be without Drogba, Lampard, Terry as well as Cashley and Bos.

Not good. Not good at all.