Hold your breath: Lampard pulls out of friendly with thigh injury

Share All sharing options for: Hold your breath: Lampard pulls out of friendly with thigh injury

Chelsea midfielder Frank Lampard has flown back to England after sustaining a thigh injury on international duty in Qatar. Lampard was preparing for England's friendly against Brazil this weekend. 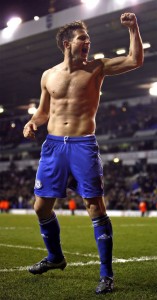 An FA spokesman: "We can confirm that Frank Lampard picked up an injury to his left thigh whilst training today and will be returning home this evening. There will be no further call-ups to the squad."

According to the Guardian, the FA medical staff's initial assessment suggested Lampard could be out of action for a few weeks. Super Frank and his camp are suspecting it may be more serious. This is, after all, the same problem that ruled the midfielder out for more than a month twice during the 2007 season.