Share All sharing options for: Blues Brothers 2000 (not the movie)

In following with this week's pattern of posting hilarious pictures, photoshopped or no, we bring you this marvelous offering from the Sun. Luckily, the accompanying interview is not half bad. Thanks to reader Chelsea for the heads up. 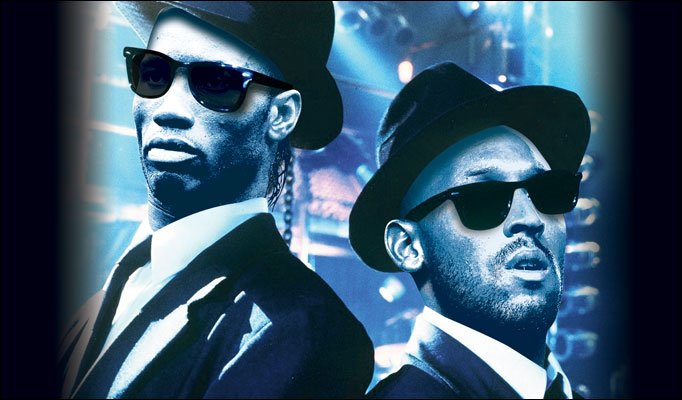 Q: When Nicolas signed did you feel, Didier, you had to prove you were better?

DROGBA: No. Jose Mourinho had left a few weeks earlier and Avram Grant told us we were going to change our style.

I thought 'So much for the better we will finally play two up front'. It suited me as I was starting to get tired alone up front. Grant asked me if Nicolas was a good choice I said 'Of course'. What I didn't know was that they were going to play one or the other but not the two of us together.

ANELKA: Strikers know instantly if they gel or not. I immediately knew I could play around Didier. I didn't come to Chelsea to score goals but to give him the ball so he can score as much as possible.

Q: When you understood it would be one or the other playing instead of together, how did it affect your relationship?

DROGBA: We didn't understand why they wouldn't play us together. When Nicolas would come on during games we were lacking the automatic understanding. But far from going to war with each other to get the only place up front, we did everything to impose our partnership in attack.

ANELKA: Every time we played together we did everything to show we were compatible. We needed to show it could work.

DROGBA: When Guus Hiddink arrived he saw we could play well together up front. But he quickly returned to 4-3-3 and often he put Nico on the right.

ANELKA: It's enough to look at Didier's game to know why we can play together. He has such a physical presence so all that is required of me is to move around him. I've always been more comfortable as a second striker. When I was at Liverpool that was my position. Maybe at Manchester City and Bolton I was the main striker but I've always preferred being the support striker.

Q: How do you develop your understanding?

DROGBA: Everything we do is mostly by instinct. It's intelligence that makes the difference. We think the same way about football and at the same time. You can't learn that. There are players alongside who I know I could play for hours without scoring.

ANELKA: Sometimes we reposition ourselves and simple eye-contact is enough. When I have the ball or want it, I always look to see where Didier is as I know he's already anticipated where to receive it.

I had this kind of relationship with Dennis Bergkamp at Arsenal. There also we could find each other with our eyes closed. Like with Shaun Goater at City and Emile Heskey or Michael Owen at Liverpool. It's not difficult to form an understanding with great players.

You just need intelligence to never lose sight of the essential which is to win, not to be an individualist. If you want to win the game on your own, as a few try, it doesn't come off. There comes a time where you find yourself all alone.

Q: Didier, you've had many other strikers at Chelsea but did not form such a partnership. Why?

DROGBA: Because I spent my time at Chelsea playing alone up front. But I always said I preferred playing two up front. I can tell you that I am a lot more comfortable with Nico alongside me. I am really less tired after the matches now.

ANELKA: I always said I am a support striker or an attacking midfielder. But managers wanted me up front after seeing me score for Arsenal. What can I do? I feel a lot more comfortable playing a slightly deeper role, like Bergkamp at Arsenal. I can play as a striker but a bit further back I feel I can be more effective.

DIDIER: It's easy to play with you as you understand the game in the same way as I do.

Instinctively we need the same things at the same time. You can't explain that. In the offensive phase of the game we have the same dictionary, the same language. We know immediately what the other is going to do.

And when you gain time at the start, in the end it's easier because of the quick start you had. Particularly with two strikers like us who love it when the ball travels very quickly.

ANELKA: As I've played as a central striker I know what players like you expect - play the ball in attack as quickly as possible. You make yourself available in a great way and that makes my task easier. As soon as I touch the ball I look for you.

My whole game at Chelsea is to combine with Didier as much as possible.

And you go where I want you to as you know that it's rare that I won't listen to you shout and either go on my own or pass it to somebody else.

DROGBA: It's true when I see you with the ball I ask for it because I know it will come to me very quickly. It's all about a 'feeling'. Bizarrely, it's rare that we are both together in the box.

ANELKA: The ideal partner in attack is one you wish from the heart that he succeeds. When he scores you're happy for him. If that sincerity and detachment does not exist the duo will not work well because there will always be doubts.

It's sometimes hard to set up someone to score when you know you yourself will rarely have the right to get your own little pass as the other player thinks only of himself and his goals.

Maybe that has happened to me and it complicated the rapport and the relationship on the pitch.

When you start thinking during the game 'I won't pass it to him because I'm fed up of him scoring all the time' things quickly become complicated. In any case I never played like that.

DROGBA: It's also the mistake that many make about strikers by just looking at the stats. A great striker is not someone who is on the pitch just to score. Like Nico, I never had a problem to set up a team-mate even if I know some had a problem with me.

ANELKA: There are strikers who only think of themselves and are happy if they score even if they barely show in the game. Neither Didier nor I like to do that.

DROGBA: Neither Nicolas nor I ever saw each other as adversaries but as partners. That may be the secret.

Q: What faults do you find in each other?

DROGBA: Mmm... his heading is not very good. And sometimes he can be irritating giving the impression that it's too easy. He knows he's very fast so sometimes almost stops before accelerating again and risks losing the ball as he's waiting for the opponent.

ANELKA: Maybe he shows himself to be very nervous at times and he gets angry very easily. But you can understand that as we are always looking to him.

Eh, for the hell of it:
"Lots of space in this mall"